David Walliams’ children’s books are exceedingly popular with their target audience due to the over the top personalities and general misbehaviour by many of the principle characters but maybe not so popular with the adults. The same can be said for the stage version of some of the books. Several have now been produced for the stage including Mr Stink and more recently Gangsta Granny.

Birmingham Stage Company who are renowned for their adaptations of children's books have this time taken Walliams' Awful Auntie and are touring it aound the country.

Twelve year old Stella Saxby wakes up to find that she has been unconscious for months after a car accident which killed her parents. She has been looked after by her Aunt Alberta and her aunt's pet owl Wagner. But her aunt has an ulterior motive and now Stella is awake her aunt can put her nefarious plan into motion. Stella, with the help of her friend Soot, must defeat her aunt's plan and stay alive. 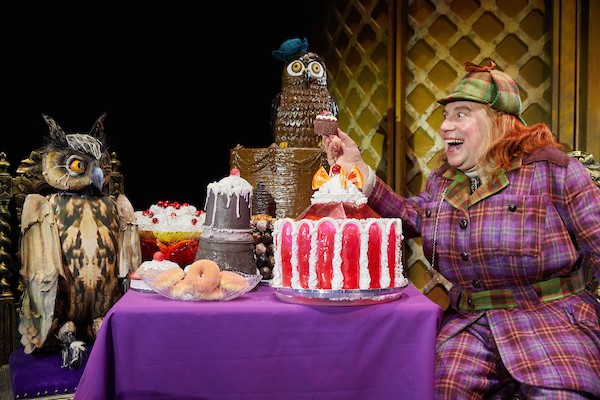 Georgina Leonidas is a sweet Stella, if unconvincing as a twelve year old, while Ashley Cousins is an engaging Soot. It is impossible to ignore though that although Stella refers to him as short, he towers over many other cast members. As the butler Gibbon, Richard James is suitably daft, and Roberta Bellekom proves an excellent puppeteer in charge of the beautiful Wagner puppet.

Timothy Spayer in the title role, is given free rein to be as over the top as possible and while in the short term it is amusing, it very quickly turns into tiresome. He is undoubtedly an excellent actor but this role doesn't show it and it becomes annoying to watch. All the characters are very much two dimensional, a serious flaw in the original writing. While Aunt Alberta is obviously designed as a person to dislike, unfortunately there isn't enough development in the other characters to find any empathy for them, making the whole show a very ambivalent experience.

On the other hand Jacqueline Trousale's set is a wonderful world of turning staircases and doors, creating the extensive rooms and corridors of Saxby Hall and her costumes are excellent copies of illustrator Quentin Blake's vision of Aunt Alberta and the rest of the cast.

If your child is a fan of the books then taking them to this is a good way to introduce them to theatre, but as a family show it is lacking the depth needed to make it good night out for all.