This great stalwart of the opera repertoire has seen many treatments since its triumphant premiere in 1851, most notably Jonathan Miller’s acclaimed 1982 New York Mafia version, revived umpteen times since. By contrast, this production, playing for three nights at the compact Sale Waterside, strips away all the accumulated historic layers of interpretation to focus on the central emotions of the action: lust, betrayal, treachery, obsession.

Bare Boards Opera is a new company, with a mission to bring opera to a wider audience. The ethos of the company is well-expressed in their name: no extravagance, no orchestra, no stars: just a dedicated group of professional and amateur singers with piano accompaniment, tackling one of Verdi’s darkest operas with energy and commitment.

The production dispenses entirely with scenery, using a simple curtain, like Shakespeare’s inner stage, and a pair of ladders either side, which are sparingly, but tellingly used. The debauchery of the Duke of Mantua’s court is startlingly evoked in the fetish-style garb of the courtiers, all of whom are also masked throughout. It is a feature of this production that the players are present almost all the time, watching from the sidelines when not directly involved, and this emphasises the secretive, claustrophobic, even voyeuristic atmosphere of Verdi’s Mantua. 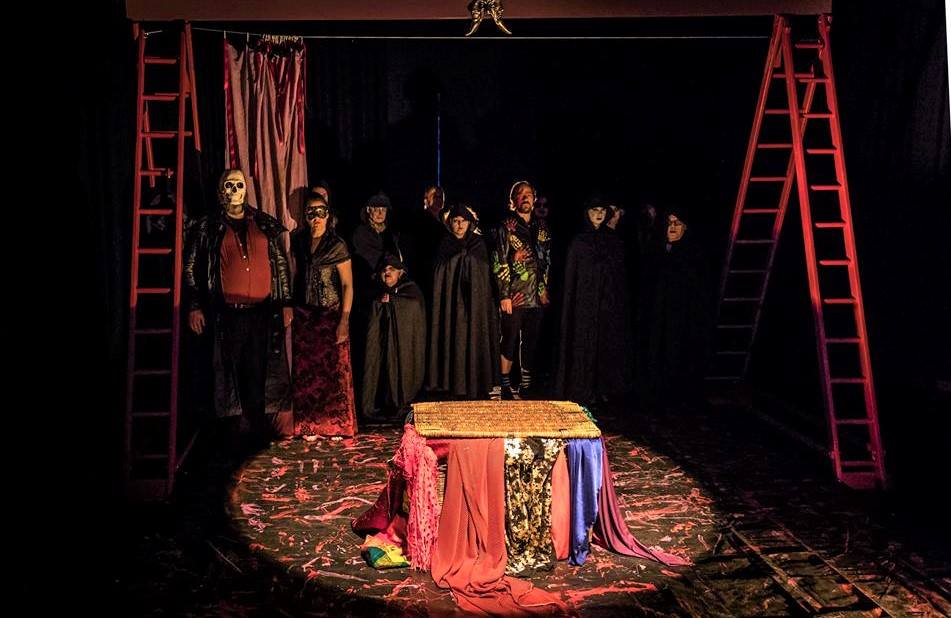 The principals are strong. Richard James Belshaw is striking, his bald head enlivened with a blood-red stripe: he conveys the decadence of the Duke powerfully, swaggering about the stage energetically, and dominating his simpering hangers-on. He takes one of the most well-known arias in the canon, “La donna è mobile” in his stride, singing with confident humour. Baritone Jonathan Stinson, taking on the title role, wrings every last drop of emotion from the fate of the wretched Rigoletto, his initial confidence shaken by Monterone’s curse, and forever after haunted by premonitions of disaster. Soprano Kerry Firth shines as the doomed daughter Gilda, particularly in the tender “Caro Nome”, managing to project both innocence and desire at the same time. She also manages her final dying aria "V'ho ingannato” adroitly, despite singing from a crouched position. These three main characters are ably supported by an excellent supporting cast, notable among whom are Derek S Henderson’s grimly malevolent Sparafucile; Helen Anne Gregory’s provocative and glamorous Maddalena; and Mark Gwynne’s splenetic Monterone. In the minor roles, Callum Speed is suitably slippery as the scheming Marullo, and Philip O’Connor makes the most of the part of the Duke’s associate Borsa, sporting a pair of devilish horns.

Barry JC Purves’s direction is refreshingly straightforward, letting the powerful narrative do its work. The Waterside’s small stage is always busy in this production, the ensemble scenes being enlivened with plenty of movement and interaction: there is no suggestion of static, concert-style singing here. Jonathan Ellis at the piano has possibly the most demanding task of all, and he carries it off well, managing to generate power and pathos in his accompaniment.

This is a very impressive production, especially considering the resources available to the company. The elemental darkness of this tragic tale is always to the fore, and the imaginative staging keeps the audience involved from the ominous opening to Rigoletto’s final anguished cry of despair.