Sale and Altrincham Musical Theatre were welcomed to the Waterside in Sale on Tuesday evening for their production of Jekyll and Hyde. This well-known gothic tale by Robert Louis Stevenson was first published in 1886 and there have been many successful stage adaptations since. Tonight’s performance was certainly an unforgettable interpretation.

The story relays the tale of Dr Jekyll and his desperation to find a cure to rid people of evil and his wish to try and save his Father who was suffering with mental illness. Instead he creates an alternative, demonic, horrifying personality that creates havoc on the streets of London.

Initially I could not possibly imagine how a musical version of this infamous story would work. However, I was wrong to consider this, as it absolutely worked on many levels. Directed by Martyn Preston, his decision to leave out the traditional London backdrop for a more minimal set worked so well and enabled the audience to let their mind run wild and allow the actors to dictate the backdrop through their performance alone. 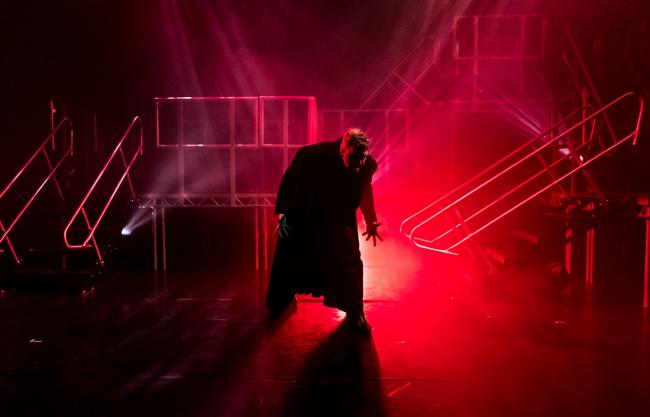 Performing as the lead in this production was certainly going to be very intense and I was concerned that with singing on top of this role, it would have to be performed by a special person. There was no doubt after the first few minutes of watching Ian Curran that this was going to be an incredible performance. He played the part of Dr Henry Jekyll and Edward Hyde to perfection. He was sinister, evil and totally possessed as Hyde and by comparison he was charming, calm and passionate as Jekyll. Intermingling these two personas was incredible to watch. Curran’s vocals were outstanding and would be not misplaced on the biggest of stages. I could not take my eyes of him every time he was on stage. His transition to Edward Hyde was horrifying to watch and the murder scenes would make the majority of the audience jump at least a little in their seats.

With too many brilliant actors to mention it would be remiss not to applaud Francesca Bowman as Emma Carew. Her performance as Jekyll’s adoring fiancée was magnificent and matched with delicate yet powerful vocals, her performance was effortless on stage. Equally brilliant and capable was the magnificent Elizabeth Lovelady who played the part of Lucy Harris. She commanded the stage and gave a gutsy, fearless performance of one of the prostitutes with whom Hyde became obsessed with. Her voice was phenomenal. Paul Rendel as Sir Danvers Carew also provided the audience with a solid performance and demonstrated a warmth on stage in his relationship and understanding of Jekyll.

Choreography was spectacular especially in view of the amount of actors on stage in some scenes. The ‘Bring on the Men’ number in Act 1 was quite something to watch and the prostitutes certainly ‘gave it their all’.

I found it hard to believe I was watching an amateur performance for most of the evening. There was such quality and richness on stage from everyone involved. The lighting was perfect. Aaron Smith and Herve Girardin must be congratulated for this as it was the lighting that entirely created the mood for the performance and each solo highlighted through a sinister white light against a simple set, was perfect and added to the whole eerie atmosphere on stage.

This was a gripping performance from a fabulous bunch and they totally deserved their standing ovation. Never have I enjoyed watching such a dark, sinister performance that involves several murders, prostitution and evil yet is still ‘musical theatre’. Absolutely loved it.