Eve Shotton played the sanest Hamlet I’ve seen, still emoting every lyrical word and yet at no point did it feel like she descended into mania, this relatability helped us to be on Hamlet’s side, and for the whole story to be more naturalistic. In these turbulent times of frequent political scandal and corruption it’s a good choice for Girl Gang Manchester and Unseemly Women to choose Hamlet as their second all female Shakespeare production, after their successful run of Romeo and Juliet in 2018.

Directed by Kayleigh Hawkins, the cut of the text was brilliant, leaving the usually a-little-too-long show at an accessible running time of three hours, with a short 10-minute interval. We never lost threads of the narrative; much more focus was given to the cast as a whole, rather than being dominated by Hamlet alone. 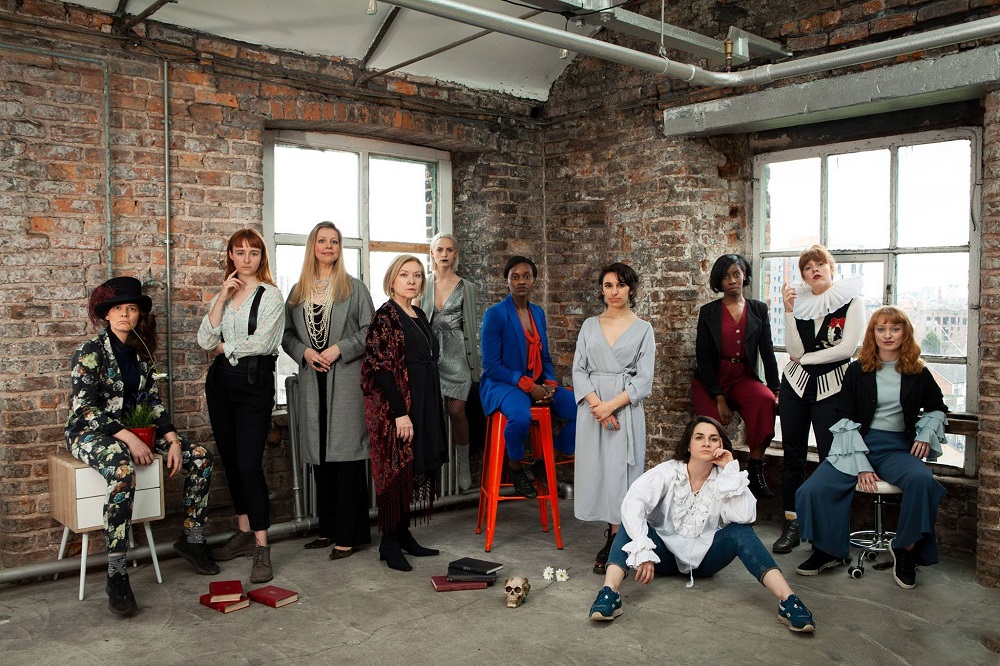 The focus was given more to the relationships in the piece, especially to Horatio, played by Sophie Giddens, who felt like a much more realistic supportive best friend role and was present for most of the scenes. Polonius too was given more focus, especially developing relationships with and between Laertes and Ophelia. Emily Heyworth as Polonius was the truly stand out performance of the night, as she embodied the verbose fool brilliantly with fussy gesticulating and wide-eyes of misunderstanding, interacting playfully with the audience throughout.

The lighter sides of the well-known play were teased out generally, with the gravedigger scene always being a highlight after the heavy opening of the second half. Amy Gavin and Hannah Ellis Ryan played the two clowns with broad Yorkshire accents and expert facial expressions of comedy, as they flung dirt around the stage. Rosencrantz and Guildenstern too were a fresh take on what we’ve seen done before, they were aloof, not so much conceited but just self-involved and relatively dismissive of Hamlet’s feelings like they didn’t really have time for him, in their slick suits, sunglasses and lipstick.

The lighting of the piece was crucial as it indicated any shift in tone, the stage lit blue for Hamlet’s soliloquies and red for passionate moments such as when Ophelia is reading Hamlet’s love letters. These moments were also pleasingly acted out as an aside, particularly enjoyable for Hamlet’s letter to Horatio about pirates taking his ship acted out with exciting music and fencing, it was great to experience some none-naturalism at this point. Drones and voice effects were used well for the ghost and the dynamic players brought on a microphone for added depth and levels leading up to their pivotal ‘mousetrap’ performance.

Some of the text in Shakespeare can be problematic in regards to gender and Hamlet is no different (‘frailty, thy name is woman!’), none of these archaic lines were changed or marked in any way in the performance, which was a bold choice, but also one no one can argue with. With an all-female identifying cast it felt like there was some pressure on the show to deliver a ‘strong feminist message’, a twist on the original in some way. There should not be such pressure on shows to do this, and there wouldn’t be if more female-lead theatre were common.

All the more reason to go and support this show, and Unseemly Women, which is produced alongside Hamlet and will be performed on the 9th - 10th May also at Hope Mill Theatre. Girl Gang Manchester and Unseemly Women have clearly demonstrated there is a hungry appetite for women-lead theatre, with a near sell out opening night filled with a mostly female audience, it can be done and they’ve created unparalleled opportunities for women in theatre with this work. I can’t wait to see what they do next.