Kill a Witch or Die Trying is performed by the The Meraki Collective and is a mythical tale that analyses various aspects of the role and perception of the woman.

The performance is a three woman show and takes the audience back to the days of witchcraft and the subtle influences on women of this time and since this time.

The set is appropriately simple, with a floral archway in the centre of the stage it opens to the three women initially running in circles and then slowing down to stand together and they proceed to place white wigs on in front of the audience. From this moment we were clear that they become the witches. Costumes are red silk dresses that are eye catching with their white wigs and aid the overall visual aspect in the movement and dance of each woman. 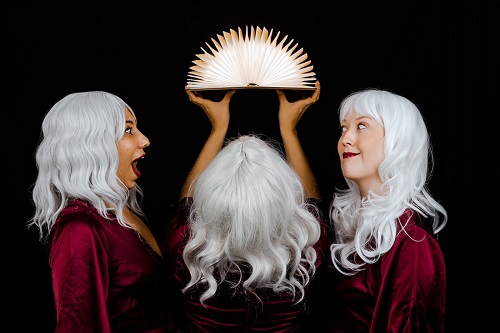 Whilst this piece of theatre was visually captivating and ethereal there was a sense that at times the narrative of music and dance was intending to take the audience to a new place in the performance, however sadly it did not always do this. There was a lot of running, a lot of repetitive dance and whilst it added to the richness of the performance, the duration of this aspect was possibly not required. Some of the dances were simply too long.

Essentially about the influence of the woman it demonstrated how women had been demonised in the past and how they were not allowed to stand up for what they believed in. The intuitive nature of how a woman thinks was addressed very cleverly and a particularly poignant moment was the telling of jokes that were largely negative to women and the reaction of the women on hearing the jokes (and that they that were not amusing). The themes addressed were interesting and thought provoking. Themes including struggles with body image, trying to please, sexuality and domesticity were all particularly poignant.

There is no doubt that the production was flooded with talent. The dance was energetic and captivating but in some ways, it was often open to interpretation that it confused. It was clear most of the time the point that was being made but I found I was often lured into a scene that was rich and detailed but actually took me nowhere.

The humour in the show was cleverly injected. The three women were adept at injecting humour- at times speaking directly to the audience and the connection between the three of them was very real. Assisting each other with wig fitting, reassuring touches throughout appeared to demonstrate the essential companionship of women that was more meaningful than some aspects of the performance as a whole.

Kill a Witch or Die Trying was certainly clever and the Meraki Collective should be applauded for an energetic display of narrative through dance, humour but most of all companionship with each other. It did address the role of women in the past and also in today’s society, but I was left wanting a little more clarification of each aspect.