‘Chicago’ - full of razzle dazzle, glamour, murder...and all that jazz. Set in the 1920s in the heady world of jazz and booze, it is the story of two murderesses: Roxie Hart and Velma Kelly and their obsession with fame and celebrity.   It is a cynical swipe at society which is relevant more than ever today (various reality TV shows spring to mind which I won’t name).

The two women vie with each other for press attention, yet the fact that several people had to die to catapult them into the spotlight seems to matter not and is merely a necessary stepping stone on the road to fame.   The corrupt legal system ensures that they are both found not guilty and they go on to have their own vaudeville stage show.

Written by John Kander and Fred Ebb with choreography by Bob Fosse, Chicago is a Musical Theatre classic: extremely stylised and with trademark Fosse choreography, (bowler hats, gloves and finger clicking), it is not to be taken on lightly as it demands much attention to detail and any deviation from the style would result in the whole intention being lost. It is certainly in my top three musicals so I am a tough crowd with any Chicago production.

Tonight did not disappoint. 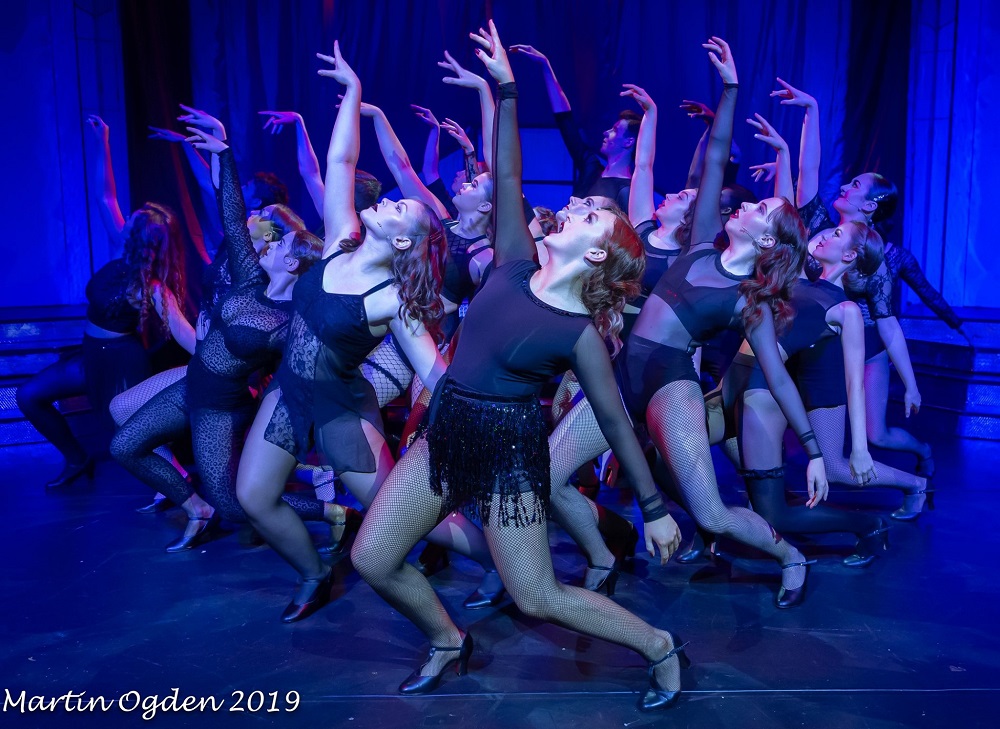 Although the staging is slightly different – the traditional gold proscenium set has been replaced with a 1920s style staging which works very well – Director Joseph Meighan has remained faithful to the stylisation and traditional risqué and revealing costumes.

The two female leads: Velma and Roxie are played by Eve Rowan and Annie Welsh respectively. They are very well cast.   Eve Rowan’s portrayal of Velma Kelly was outstanding. Eve is a powerhouse of acting ability and as Velma, she delivered all the S’s: self-centredness, sarcasm and sass.   I loved her facial expressions and she conveyed so much, even with a casual lowering of her eyelids.   She had a lot of solo choreography which she executed wonderfully.   Annie Welsh as Roxie portrayed her perfectly as the manipulative, fame-hungry user that she is. She was very confident and controlled, particularly when performing the rather demanding song, ‘Roxie’.   I would have liked her to have more choreography when she was on stage alone as it felt a bit static at times but this was lessened when the boys came on stage and the choreography was superb. She came into her own when performing ‘Me and My Baby’ and I really enjoyed watching her.

I have seen the professional version of ‘Chicago’ in the West End and also many touring productions.   I can say without doubt that Joseph Morgan’s version of Amos Hart surpasses any other that I’ve seen.   I have never heard an audience “awwwww” in sympathy with Amos before and they did it several times tonight.   He completely wooed us with his humble charm and his performance of “Mr Cellophane” conveyed brilliantly just how much of a nonentity Amos is.

To play scheming lawyer, Billy Flynn, you have to have presence and self-assured confidence – and Emmanuel Moro certainly did...not to mention his astounding voice.   He provided the humour the role requires but he also had the charisma and just the right amount of smarm.   His voice and breath control during ‘We Both Reached For The Gun’ were of a professional standard, he did a fantastic job.   I would have preferred a little more movement from Roxie during the song to make it clear that she was being a puppet. However, I liked the direction at the end of this scene where Billy is exercising the ultimate in crowd control, it was very visual.

When I became aware that Amelia Atherton had been cast as Mama Morton, I was very excited as I knew she would be perfect in this role and she proved me right.   I was won over by her before the end of the first line of ‘When You’re Good To Mama’.   She has all the earthiness that the character demands and also a certain spellbinding quality to her performance that makes you totally believe her in whatever role she’s playing.   One of the high points of the show was her duet with Velma in ‘Class’.   (I didn’t think the audience gave it a fraction of the response it deserved; it was absolutely amazing).   Certain people have star quality and Eve and Amelia absolutely have it in abundance.

Zac Frieze played Fred Caseley but was also one of the dancers during ‘Roxie’ - and he really caught my eye because of his dancing – he could go straight into a professional production of ‘Chicago’ with those moves!

The role of reporter, Mary Sunshine, is normally played by a man in drag and the reveal comes at the end of the show.   However, Lara Hancox played Mary Sunshine as all woman tonight and she did a great job as she has a wonderful voice.   I loved her uber-sweet version of ‘A Little Bit of Good’.

A special mention must go to Caroline Featherstone who played Hunyak...apart from the words “not guilty”, she spoke the rest of her dialogue in Hungarian which is extremely impressive.

Tonight’s standout musical scenes were ‘All That Jazz’, ‘Cell Block Tango’ and ‘Razzle Dazzle’.   Such attention to detail – I think Bob Fosse would have been proud.   Huge credit must go to Louise Pettitt for the choreography as all of it was outstanding and of an exceptionally high standard.

The direction for Cell Block Tango and the individual performances of the six murderesses were superb.   These six ladies are the absolute epitome of Girl Power....be afraid, be very afraid! (and for goodness sake, don’t pop your chewing gum).

However, my favourite scene was the courtroom scene:   it was an absolute joy to watch.   The humour – particularly from Amos – was just wonderful.   I loved the way the jury participated, it worked brilliantly.   This was exceptional directing and extremely impressive.

The cast have had less than two weeks of rehearsals for this production (which is mind blowing!) yet they have produced an absolutely outstanding and professional show which will not disappoint the most diehard Chicago fan (myself included). Congratulations to all involved.

The MYT production of ‘Chicago’ is seductively glamorous with stellar performances.   I was razzle dazzled and very tempted to rouge my knees and roll my stockings down.   It ticked all the boxes.