In celebration of the Queen's 90th Birthday a concert was performed to an appreciative audience by the talented members of Sale Brass Band. Also in attendance were the Mayor and Mayoress of Trafford.

The musical director for the band was Alan Seymour who also turned into a 'tongue in cheek' historian with his knowledge and research of the Queen, ensuring that each piece performed tonight bore relevance to her Majesty........ Who would have known that every Thursday she dons a fake moustache and sombrero and treats the family to a Mexican meal hence the very apt rendition of 'El Cumbanchero' by Hernandez. Seymour was an entertaining 'compere' for the evening bringing laughter with his tales and jokes especially missing vital bits of one which was relevant to the punchline and having to recap!

The overall presentation of the band was good and they were dressed alike, very smartly in deep turquoise blazers and white shirts and ties and black trousers/skirts. A little niggle as I know that obviously refreshment is needed by the band being under hot spotlights and playing their instruments, but an array of bottles of different shapes and sizes under the chairs and music stands gave a cluttered appearance, if everyone had the same drinks container it would minimise this. The ensemble this evening also had some members from other brass groups who valiantly stepped in to cover for members of Sale Brass unable to attend and thanks were given.

Over the years the band have won several competitions the latest achievements being at the Buxton Brass Band festival in May.

Everyone rose to their feet for 'God Save The Queen' before the concert began.

Firstly we were treated to 'Cross of Honour' by Rimmer which is a traditional Military March and certainly got the feet tapping. This was followed by the renowned overture 'Nabucodonosor' by Verdi. Seymour then introduces James McLeod who he is obviously very proud of and indeed is responsible for him being in the world....... he introduced James's parents to each other! 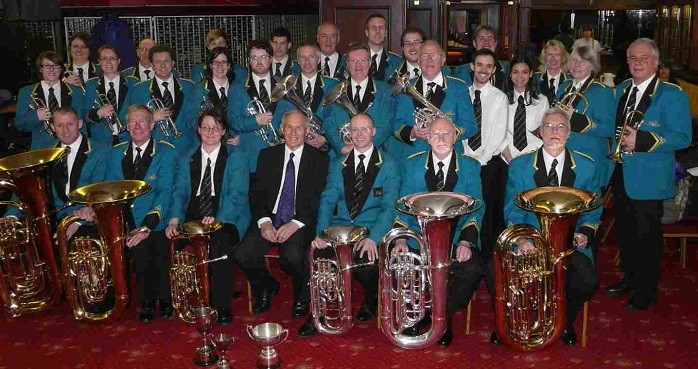 McLeod is extremely talented and is the Principal Euphonium player for Leyland Brass. He attended the Royal Welsh College of Music and Drama and was awarded the Linda Mowat prize for best brass soloist. Another achievement was appearing as a soloist on the BBC's Young Brass Competition and was a finalist.

With a rendition of ‘Blaydon Races' on the euphonium followed by 'Myfanwy' his performance was warmly received with Myfanwy being particularly poignant to several Welsh members of the audience. (The link to the Queen being her love of horses and racing and the obvious Welsh connections).

We were then treated to the fabulous harmonies of the ‘De Voci Women's Choir' referred to as a 'bit of class' by Seymour and indeed they were. Their voices blended beautifully as they sang three songs during each half of the concert and my particular favourites were 'A Nightingale Sang In Berkeley Square'   and 'Bridge over Troubled Waters'. The De Voci Choir was formed in 2007 by musical director Lorraine Brown, who is a singing teacher at private and state schools. She also offers private tuition. Holding weekly rehearsals the choir perform two concerts a year and also appear at music festivals and charity events. They are available for private functions. The choir from Altrincham topped the scales when taking first prize in the ladies choir category at the prestigious North Wales Choral Festival of 2014.

The band then performed two more pieces 'The Lost Chord' and 'Happy' which was taken from the film Despicable Me 2 and was a number 1 hit for singer/writer Pharrell Williams.

After a short interval the band returned and performed a couple of more pieces with enthusiasm including a medley of wartime songs which had the audience singing along. We were then treated to another solo appearance by Mcleod playing 'Grandfathers Clock'. That euphonium could certainly talk! McLeod graciously, with raised eyebrows, accepted the anecdotes bestowed upon him by Seymour and the close friendship between the two was evident.

A finale of 'The Last Night of the Proms' brought to an end a most enjoyable evening. Well done to everybody and also for raising £200 with a raffle which will be donated to Addenbrookes Hospital by local fundraisers.