Once again I was honoured to witness the latest tour from The Lancashire Hotpots as they played the Oldham Coliseum tonight on their first visit to the venue. Clearly this was a popular choice with the auditorium virtually full creating an atmosphere in the theatre like one I have not witnessed there for a long time. This comedy folk band from St Helens remain at the top of their game bringing their “Now't Like The 80’s” tour to Oldham.

First of all I must doff my flat cap to drummer Kenny Body who last night was on a works do and still seemed rather hungover this evening yet still made it to the stage. Observing some of his facial expressions as he drummed his way through the 2 hour plus set he provided some very funny moments. This just goes to show this group are made up of normal working men who love a pint or two as much as they do performing.

Tonight’s gig was accompanied as ever with plenty of Carlsberg on stage, tonight supplied by an audience member, and with the audience drinking throughout the evening this made for a fantastic evening reliving some of their greatest tracks as well as enjoying some newer numbers. A lot of the songs featured tonight maintained a constant theme… drink! 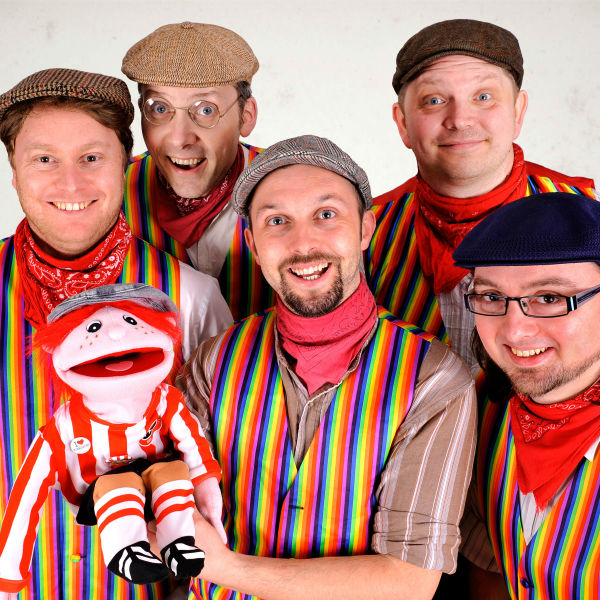 The rest of the group led by Bernard Thresher quite clearly love what they do and their rapport with the audience is genuine and heartfelt. Dickie Ticker, Bob Wriggles and Billy McCartney complete the line up on a stage decorated with flags and balloons all paying tribute to the 1980’s. Opening the night with “Last Can Blues” the audience were in as good a voice as those on stage as the familiar songs kept coming with “Bitter, Lager, Cider, Ale, Stout”, “The Barmaids Baps” and “Poundland” all featuring before the interval.

For those familiar with the Hotpots shows will be pleased to hear Little Johnny makes a welcome return and is as cheeky as ever. Also an addition to the show for this tour is Mr Stumble who treats the audience to some balloon modelling, mind reading and a little magic to close the first half.

Returning after an interval which saw the bars busier than they have ever been at the Coliseum the atmosphere raised even higher as “Keys, Wallet, Phone”, “Thirsty Thursday”, “He’s Turned Emo” and of course the all-time classic, and one of my favourite “Chippy Tea” filled the packed auditorium. Not content with just singing along to every song the audience took part in a conga around the stalls during the second half, another Hotpots gig tradition.

Described as The Grumbleweeds on Jager the Lancashire Hotpots are a band not to be missed. There is absolutely no chance you can walk out of one of their gigs without the broadest smile on your face and singing “Chippy Tea” to yourself on the way home. If you haven’t seen them before, book now! This may be the first visit to the Coliseum but I am certain it is not the last.

2017 sees the band celebrate their 10th anniversary and I for one look forward to their inevitable tour to celebrate this milestone. Perhaps an ultimate 10th birthday party at a large venue such as the Lyric in The Lowry is in order? I am sure the Cockers will fill it for one special night!