'One Night of Queen' is an in your face Queen tribute performed by Gary Mullen & The Works (The Works being Billy Moffat, Jon Halliwell, Malcolm Gentles and David Brockett). Gary won the "Stars in Their Eyes" live grand final in 2000 and hasn't looked back since, performing regularly on television and also touring.

Tonight's show kicked off with "One Vision" and brought Gary strutting onto the stage with the trademark yellow jacket and long stemmed microphone which he used to full effect.   He had immediate stage presence and was a fireball of energy, with a little bit of a crazy edge. Not to mention his agility!

Gary has mastered every single 'Freddie-ism' - he does bear a resemblance to Freddie facially but I didn't feel this was particularly strong until I saw him performing in profile when the similarity was uncanny. Put together with the trademark energetic gestures and head movements, it was quite astonishing.

After the first few songs, Gary chatted to the audience and apologised for the fact that the show had started thirty minutes late – this was due to a problem with their van and they had only arrived in Manchester at 5.30 pm, hence the delay.   He dedicated "Under Pressure" to the crew and was very appreciative for all their efforts. 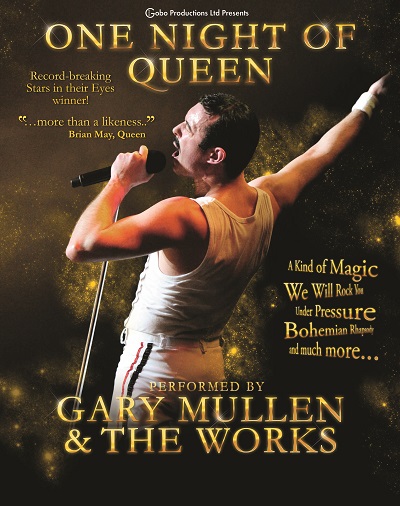 Gary has a very good rapport with the audience and his comments aren't restricted to the usual "let me see your hands".   He joked, he winked, he flirted, he waggled his bottom – we got it all! He completely captures the spirit of Freddie's outrageous showing-off. Personally, I would have preferred a few more crowd pleasers earlier on. However, the audience were soon whipped into a frenzy by "Another One Bites The Dust" when we were treated to full frenetic Freddie-style performing, not to mention amazing vocals – he really does sound like the real thing.

Gary went off stage at one point and then the tell-tale opening bars of "I Want To Break Free" began...I was waiting to see him emerge wearing a pink top, falsies and pushing a Hoover...but alas, it was not to be.   I would have liked to see this – after all, Freddie is the epitome of uber-camp and theatricality and this song is the perfect vehicle for all that.

At one point, Gary was getting the audience to copy what he was singing – this demonstrated not only how much he sounds like Freddie but also what an amazing and powerful voice he has, which sometimes the music drowned out a little so it was good to hear it this way.

The first half ended with "Don't Stop Me Now" and to be honest, I don't think you could actually stop Gary if you tried – he makes the Duracell bunny look lazy.

The second half started with a teaser of "Flash" but we only got a brief intro. I felt the audience energy was lagging slightly but this was soon revived a few songs later with "Somebody To Love".

I had noticed all the way through the show that lots of people were filming on their phones and then posting on Facebook and I did wonder why they had wasted their money on a ticket when they were missing most of the action because they were looking at it through a phone screen.   I think Gary must have picked up on my thoughts as he targeted a lady on the front row and took her phone off her, said "let's see how you like it" and started filming her. He did make the observation that instead of filming it, you should watch it properly as you're missing the real thing.   Sadly, I think the irony was lost and I'm sure it went on Facebook minutes later.

It may be a cliché but I was looking forward to Bohemian Rhapsody but it didn't quite deliver for me unfortunately.   It didn't start from the very beginning and I'm afraid I was a little disappointed in tonight's version of it.

We had a little bit of a sidetrack into "Kiss" by Prince (with purple lighting – a very nice touch), then "La Bamba" which seamlessly morphed into "Twist and Shout" with Gary playing the electric guitar.

With an encore of "Radio Ga Ga", "We Will Rock You" and "We Are The Champions", Gary and the boys certainly gave it their all tonight.   I never saw Freddie Mercury live in concert but seeing Gary has bridged that gap.

For full details about the remaining dates on the tour click on the image above.