Three legends of rock took to the stage tonight at the Stockport Plaza courtesy of Joseph Whelan as 'The Boss' Bruce Springsteen, Martin Bell as Bryan Adams and Luke Goodwin as Jon Bon Jovi. Love them or hate them, tribute acts generally have a large following so it was a little disappointing to see these guys performing to a very limited audience tonight. However that said, there were some members of the audience who were keen to have a good night out and were up and dancing in the aisles with the first performance as Whelan/Springsteen took to the stage with 'Born in the USA'. Great start, looks the part and throughout the evening gave justice to many of the great hits of Springsteen.

Joining Springsteen on stage was Goodwin/Jon Bon Jovi and together they gave a great rendition of 'Dancing in the Dark'. It was a little annoying that when addressing the audience between songs the echo was left on with the microphone. Goodwin cast a comical figure (there were sniggers in the audience) as the wig he was wearing in an effort to replicate the image of Bon Jovi in his early years was a poor copy of his hairstyle and I think investing in a good quality wig would greatly improve the image and give more credibility to the performance, or maybe perform as Bon Jovi appears now. However, ignoring the hairstyle (the rest of the look was good), his performance as Bon Jovi produced some brilliant vocals with the audience joining in on many of them. 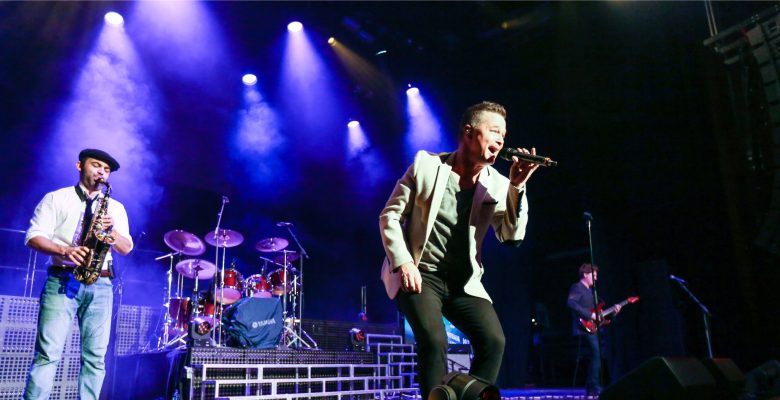 Springsteen and Bon Jovi then left the stage for next up Bell/Adams bursting onto the stage with classic 'Summer of 69'. Bell was my favourite performer this evening and knew how to work an audience, encouraging singing and clapping along. He certainly captured the voice of Bryan Adams and covered all the iconic songs including my particular favourite 'Heaven' and the one that charted at number one for 16 weeks '(Everything I Do) I do It For You'.

The three performed together and individually however at times the changeovers between artists were slow and a bit messy making you feel they did not know what was going on next!

Supporting the rockers were a four piece band with Alex Piller on drums and Andras Polyak on lead guitar, a programme was not made available to me and despite research I have been unable to find information regarding other members on keyboard and guitar so sorry guys I am unable to credit you. I would have liked to see the band play a more prominent part in the show, they were all positioned at the very back of the large stage. There were only a couple of occasions that Polyak walked forward and demonstrated his excellent skills on guitar, most rock artists have an interaction with their bands but this was not the case with this show.

Classic Rock USA promises a 'heart pumping, drum beating, pulsating rock extravaganza,' so I was disappointed tonight as it did not feel I was at a rock show. Whelan, Bell and Goodwin could all perform in their own shows as the artists they portray but there is something missing with this show (besides an audience!) and I'm not sure what. Maybe the lack of equipment on stage, (only a couple of small speakers...come on, rockers have huge speakers to belt out the sounds!) There did appear to be a couple of technical difficulties with buzzing for much of the time and sound levels on the guitar not turned up. Many tributes have a screen at the back of the stage depicting images of the artist they perform, not saying I particularly like them, but tonight there was nothing, not even a backdrop, a plain black curtain would have been preferable to the theatres satin curtain which did not really portray a rock image, The band needed to be involved and rock too, for much of the time they appeared disinterested.

I have no idea how long they have been performing together but tonight it all felt a bit unprofessional and lacklustre. Audience members from the two rows in front of me did not return after the interval and I am not sure how many more didn't. I stuck it out and enjoyed the singing but as a show its not one I would go to see again. I wanted the extravaganza, the loud music, the flashing spotlights but sadly it felt more like a night out at a local pub than a rock concert. This has all the potential to become a great show but needs some punch!