A Conversation with Sir Tom Jones - The Lowry

In these times of nostalgia, it appears many ‘has beens’ are sharing their lives through the art of word in the form of an autobiography or an intimate interview revealing the truths behind years of speculation throughout their careers. Some however cannot be considered ‘finished’ as their careers are still progressing and they may well be still in their prime.

The life of Welsh-born singer Sir Tom Jones is one of variety but sheer excitement, not merely due to famous faces he has shared stages and drinks with, but also because of the spectrum of genres his voice has covered with such versatility. In a night split between the promotion of his autobiography ‘Over The Top and Back’ through a face to face discussion - complete with slightly off-putting somewhat planted laughs - with Radio presenter Matthew Everitt (XFM, BBC Radio 6 and BBC Radio 2, as well as being the drummer in 90s bands Menswear and The Mentrose Avenue), before performing a set of tracks that make the audience in awe of the ‘golden voice’.

Welcomed on stage to a standing ovation, Sir Tom appears ‘careful’ on his feet and doesn’t seem the best at self-promotion, with limited modesty. Making quips about the dialect of his homeland, in an educational manner, it is nice to be taken back to his childhood even if it did mean knowing exactly where each family member lived.

Born at home, as many of his family were, back in Ponypridd, Thomas Jones Woodward - now 75 - had a passion for performing from a young age, also learning the ukulele, with his uncle leading the musicality as a Singing Waiter. With limitations at school - not being able to write properly, as well as suffering TB - young Tom had an admiration for the young catholic girl who wore earrings, named Linda; the lady he would later marry.

His first job being in a glove factory, his colleagues’ amateur musicians, his love for Rock n Roll came when he first heard Rock Around The Clock. Performing with a band called The Senators, under the name Tommy Scott, he was eager for his passion for the likes of Elvis Presley, Jerry Lee Lewis and Little Richard to rub off on those he would perform to in clubs and at local events. One event in particular was at the local YMCA where a Gordon Mills was visiting and, after seeing this baritone blow the minds of his audience, took him to London in 1964. Whilst in London, Mills signed Tom to Decca and mentioned that Les Reed was looking for a song for Sandy Shaw. Mills started humming a tune before recording it as a sample with Tom, little did they know it would become an international hit. The song was put to Reed, but declined by Shaw due to there being something about the original recorders voice that was irreplaceable. That song was ‘It’s Not Unusual’. The track chosen to open the final gig on this ‘In Conversation with’ tour at The Lowry’s Lyric Theatre.

Throughout the course of the night we are treated to snippets of the singer’s life, including meetings and advice from the likes of Elvis Presley and Frank Sinatra whilst performing in Vegas, as well as insight into the period where he was doing so many gigs that he developed nodules on his vocal chords - a condition becoming more frequent and well-promoted by other icons.

The interview to promote his autobiography coincides with the release of his ‘Long Lost Suitcase’ album, both of which are to compliment the idea of his life on the road, living out of a suitcase and collecting an album of photos and cassettes bearing songs that he could like to have recorded. Songs from the album are contained within the book in the chapter names.

In 1992, Sir Tom performed at Glastonbury, wary that his style would not be welcomed and his ‘surprise guest’ status for the event be underwhelming along the possibilities that they could have got someone like U2 and billed them as the same. He had nothing to fear then and has nothing to fear now.

If anything was to ruin this show, it would be the extreme use of flashing strobe lights towards the end of his set of folk, gospel and rock n roll songs which ended with ‘Kiss’ as its finale, before two encores. The set even included a song dedicated to his departure from The Voice UK - Why Don’t You Love Me Like You Used To? – Which, provided some amusement to the crowds. Other tracks, as featured on his latest album include: Opportunity to Cry, Take My Love, He Was a Friend of Mine (dedicated to a rugby player who was his late bodyguard), Raise a Ruckus, Bring It On Home and a tribute to The King of Rock n Roll Elvis Presley which was commended by Priscilla.

Despite my tender age of 23, I have had the pleasure of witnessing live performances of some pretty giant stars, some who have suffered ill-health. Sir Tom shows no signs, as most don’t, of letting up and admits that he went ‘over the top’ (Vegas) and is back!

You can find out more details about ‘Over the Top and Back’ and the new album ‘Long Lost Suitcase’ HERE! 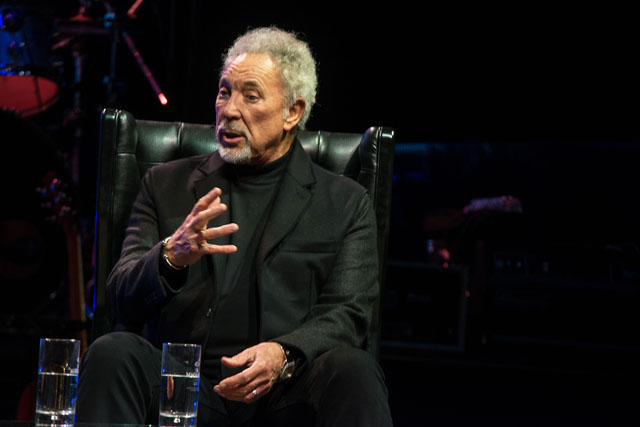