The audience were in fine voice this evening, doing a grand job with the call and response. The boundless energy from the cast was truly reflected through their reactions.Tonight was like a jukebox panto, giving us flashes of cleverly-placed classic well-known songs from many genres and decades. The scenery was incredible and the performers used the space and set well, appearing at points from various nooks and crannies in the scenery.

We had light-up jellyfish floating from the ceiling and, as the show progressed, the scenery became more and more impressive. The band was visible at all times on the second floor of the set, and we saw members of this multi-skilled cast playing live music, some of them even swapping instruments throughout the show. Musical direction by Greg Last, who did a sensational job, providing great arrangements and perfect harmony lines.

A very strong core cast, with a wealth of experience in the entertainment industry. It is hard to separate one outstanding performance from another.

Towards the beginning of the show the sound balance wasn't quite right; the vocals overpowered the music and the mix had too much bass. I was also confused by the use of hand-held microphones for only the songs - it was shame because they were distracting and a hindrance for the performers. 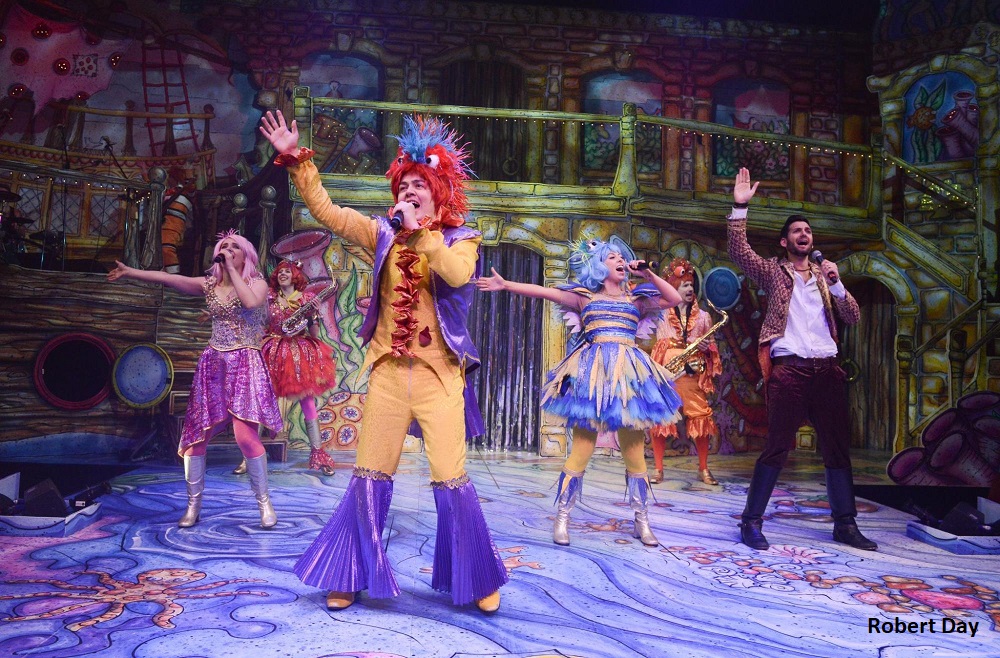 Costuming was elaborate and had intricate attention to detail, with brightly-coloured wigs and accessories.

Script writers Sarah Nixon and Mark Chatterton brought us a witty sea life-themed script with several close-to-the-mark innuendos - it felt like a cross between CBBC and a modernised Shakespeare. I get the impression the actors strayed from the text a little this evening, as is to be expected with a pantomime of course, and this only added to the comedy in my opinion.

If I had a minor criticism, I feel it took slightly too long to get into the audience participation, and although we had a dance-along and a lot of booing, we lacked the “it's behind you” and “oh no, you're not”, etc. Having said that, it was a refreshing change to have a modern injection of music and a unique twist in the adaptation.

A few scenes in, we meet a very very handsome Prince Hal - in the form of Jamie Noar, who looks like he's wandered straight off the set of Hollyoaks. Marina the mermaid is played by a beautiful, sweet-voiced Stephanie Hockley. The evil Ivanna is brought to life with a nice comic twist by Lucy Thatcher - what a voice! Adam Keast, Francis Tucker and Tom Connor stole the show with their ingenious comic timing and effortless rapport - particularly whilst dressed as puffer fish. Imelda Warren-Green - a lovely all-round performer - gave us a lovely fairy-like performance as Tiger Blue. And fantastic supporting roles from Danny Burns, Greg Last and Elizabeth Robin.

As a whole - especially musically - I can't praise the team enough; who says men can't multitask?

To conclude, a fantastic team of professionals, well worth a watch, and I wish them luck for the rest of the run.

Performances run until 20th January 2018: Go and see it! https://www.everymanplayhouse.com/whats-on/the-everyman-rock-n-roll-panto-the-little-mermaid