Despite the warm and friendly staging of Telltale Theatre Company’s Petrification, in association with LittleMighty, there is a barely-contained anxiety palpable in the air of The Lowry’s studio. Simon (Neil Grainger), a brother returning from London for his father’s funeral, sits in the middle of the space, waiting, as the audience filters in around him, finding seats. The set-up of the theatre in the round was an interesting choice, creating a closed-in sense of community in the pub setting while also placing the actors under intense scrutiny.

As Simon’s brother, Sean (James Baxter) arrives, bringing with him his boyfriend, Aiden (Jamie Quinn), the reason for the tension becomes apparent. Simon and Aiden have never met before, yet Aiden appears to be a fully accepted member of the family. Sean, in turn, disapproves of Simon’s new London lifestyle. 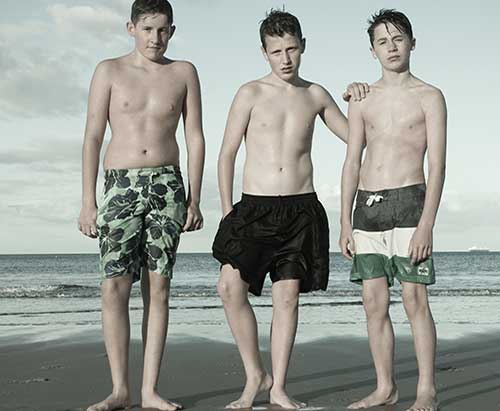 The performances from the actors are all relatable and believable, with the relationship between the two brothers particularly touching. It is impossible not to see something you recognise in each of the very human characters.

As the two brothers attempt to find common ground, and Aiden struggles to feel included, new revelations are mixed in with muddled memories of the past. This narrative structure, while performed energetically and dynamically by the cast, could occasionally be difficult to follow, particularly as several of the stories were set in the same place within a similar timeframe, and as little effort was made to distinguish different memories it was a struggle to establish a clear timeline of events. The synchronised movement pieces were well-directed and effective in establishing change, and could have perhaps been used more often later on in the piece to differentiate between the many different stories being told at once. Equally, the later on-stage costume change and singing interlude felt slightly unnecessary and not fitting with the rest of the wild, movement-based play.

I personally would have preferred a more conclusive wrapping-up at the end of the performance after the confusing unravelling of events, memories and beliefs, but the raw emotion of the stories, coupled with the excellent performances, carry the jumbled plot to its gentle, sombre final moments.