With a mission statement to be one of the world’s best classical ballet companies, Birmingham Royal Ballet is respected for its excellence, artistic innovation and social responsibility, that connects with its audiences and communities in its home city of Birmingham, throughout the UK and across the world - Presented this hour-long, interactive show, specially adapted version of Aladdin for children aged 3 years and over.

Aladdin was played by Max Maslen born in Bradford he trained at the Nydza School of Dance and Central School of Ballet.

The Mahgrib played by Rory Mackay born in Glasgow and trained at the Dance School of Scotland and the Royal Ballet School.

The Djinn played by Aitor Galende born in Castro-Urdiales, Spain and trained at Igor Yebra Academy of Dance and the Royal Ballet Upper School.

The Royal Ballet Sinfonia engulfed the front of the stage, rows of seats had to be removed to cater for this amazing Orchestra which plays frequently for The Royal Ballet and many of the world's other leading ballet companies - Philip Ellis was the Conductor of this 50-piece Orchestra and has been a conductor with the Birmingham Royal Ballet since 1990. 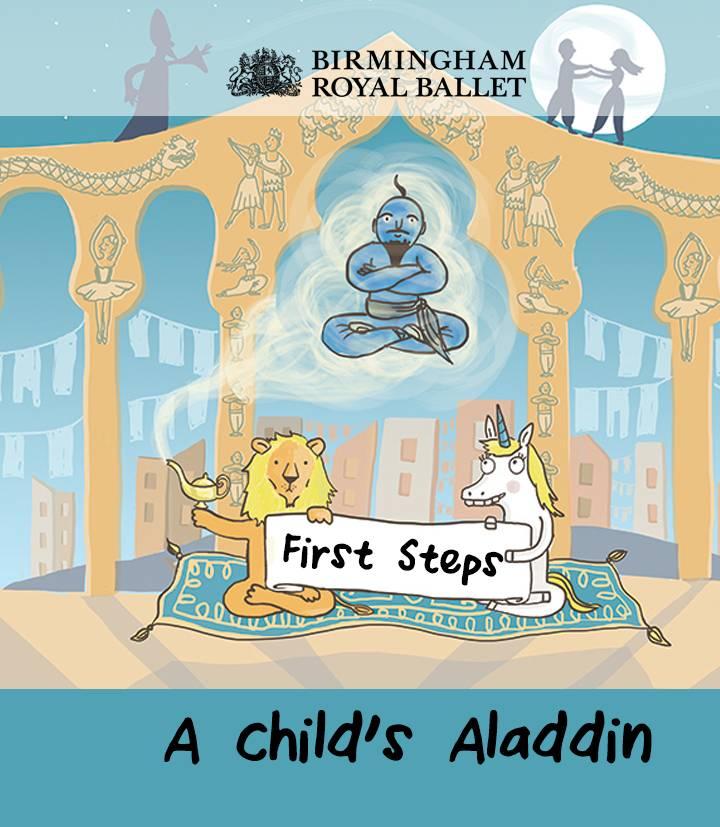 The audience at the Lowry Theatre was predominately preschool and Infant school children with either their parents or teachers. The show started with a member of the team explaining to the audience what an ‘Overture’ and ‘Orchestra’ was and explained how Ballet tells a story without words, including how there are always ‘goodies’ and ‘baddies’ in the story. Seemingly with a little magic fairy dust from the cave of wonders, the curtains rose and the story began at the marketplace where Aladdin was up to mischief.

There was lots of audience participation throughout the show, the children with their adults got to practice the art of mime by saying ‘hello’, expressing that they were tired followed by angry - The Mahgrib had the youngster miming a scene from Aladdin where he demonstrated through word then mime the sentence “she is the most beautiful girl in the world and I love her” had the audience up off their seats and interactive.

The scenery was stunning from the marketplace where there was an array of bright and vibrant colours, to the cave of bright blue beams across the stage and shining jewels glittering in the treasure chests, followed by Aladdin’s house of white laundry hanging from top to bottom of the stage and finally the Sultan’s castle magnificent and noble all a total credit to the company’s stage design team.

The children did get a little restless when the narrator spoke for any length of time as he paused the scenes to explain to the children the music, the storyline and the leading characters which did seem a little like a pantomime at times especially when the audience were encouraged to ‘boo’ when the Mahgrib tried to rub the magic lamp but the ballet dancers were second to none with their elegance and grace as they performed excerpts from Aladdin, they danced with precision and with their flowing patterns and movement created a dazzling and delightful expression and interpretation of the classic story.

During the scenes with the Genie and when Aladdin and the Princess rode the infamous magic carpet the visual effects was magical and exquisite leaving the audience wide-eyed and mesmerised.

The show is a great way to introduce children to the ballet and I think what the Birmingham Royal Ballet has done is to create a perfect synopsis of Aladdin adapted for youngsters in a fantastic visual and auditory feast.

Overall it is a great family event for all who love or are interested in the Ballet.

Patron: Her Majesty the Queen

President: HRH the Prince of Wales