Under Glass - The Lowry, Salford

Under Glass is a multi-sensory experience that may be the most unique performance I’ll see this year. A creative and experimental production, it resists genre. It’s not quite dance, not quite drama, not quite whole.

With the strange familiarity of a museum, an (admittedly unnerving) aquarium, or a human art gallery, the set contains seven individual glass exhibits – each containing human ‘specimens’.

This studio world depends on the perfect dissonance of light, sound, movement and speech. By the time you leave, it’s the outside world that feels surreal.

Be warned, however, demands are made of the audience: we actually have to move. We’re expected to sit on the floor and gather around boxes, to move and occupy space; we are free to walk around those who are trapped. 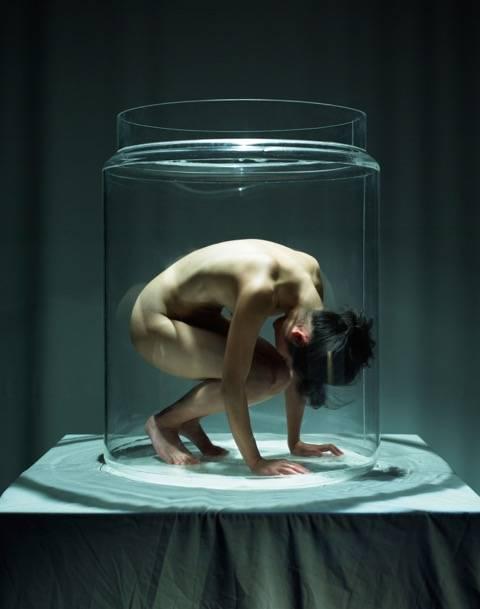 As an audience our attention is frequently diverted; our eyes are directed between the different squirming bodies until we eventually stop being aware of each other.

The purpose, I’m guessing, is to make us look for ourselves in these fragments of humanity. Do we try to diagnose the woman in the jam jar, or do we fear for the cabaret dancer? Do we relate to the office worker, or do we see ourselves in the obsessive gossiper?

Under Glass purposefully provokes our natural curiosity and instinct to examine.

The characters display symptoms of boredom, anxiety, fear, possession and often spiralling mental states. This performance, to me, represents both external and internal threats.

The trapped specimens are still living, but they are in danger; the most hypnotic containers have the most visceral, distressed movement or language, the clearest sense of ‘the end’ being near.

Alice Oswald’s poetry becomes one half of a telephone conversation from a brilliantly characterised window-watcher. This village gossip in a shrinking community hides ominous drama under banality and repetition.

Yet some characters have more depth and expression than others. I could have done without the office worker. Included perhaps for comic relief or the common experience of the 9 ‘til 5, it was the only time I saw clumsy acting and a limited idea.

But for the most part the storytelling was rich and varied, aided by the well-crafted original score and sound design.

It is a performance of wrestling opposing forces: intimacy and distance, tension and relief, confusion and sudden clarity – all brought to life with supreme physicality.

For anyone who is naturally curious, I couldn’t recommend Under Glass more. Though its ambiguities will no doubt frustrate some, its melancholic beauty is mesmerising. I loved it.