Art is something of a theatrical phenomenon. It isn’t often that a play originally in French, and by a virtually unknown author at that, becomes a huge hit on the English stage, and proves to have the staying power to run for eight years in its initial West End production. It’s now well over twenty years since the play was first produced in English, and it shows no signs of running out of steam.

In this latest version, running all this week at the Lowry, the play’s three characters are played, as is now traditional in British productions of the piece, by major league actors with whom audiences will be familiar from television. In this case, the stars are Nigel Havers, Denis Lawson and Stephen Tompkinson. They are following in the footsteps of a galaxy of British acting talent, starting with the original cast, --Albert Finney, Tom Courtenay and Ken Stott -- and including down the years such theatrical luminaries as David Haig, Richard Griffiths, Henry Goodman, Roger Allam, Tony Haygarth, Rufus Sewell, Art Malik, and even comedians such as Frank Skinner and Jack Dee. 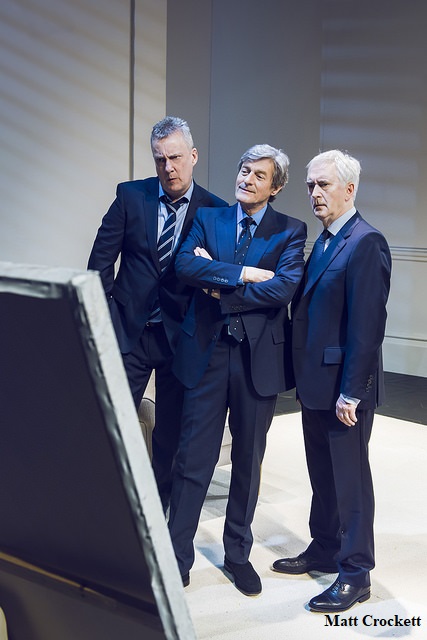 Yasmina Reza’s play revolves around a painting, and the reactions it provokes in the minds of three long-time friends. The painting is designed to polarise opinion: it is a white canvas, with some barely discernible diagonal white lines on it, painted by a fashionable artist, Antrios, who is important enough to have works on display in the Pompidou, and to command huge prices for his art. Serge (Nigel Havers), who fancies himself as a connoisseur, has spent a fortune on it. His friend Marc (Denis Lawson), a grumpy contrarian, denounces it as “white shit”, and both try to enlist their other friend Yvan (Stephen Tompkinson) to take their side in the argument. This is the blue touch paper which ignites the quarrel of which the play consists: a quarrel, yes about art, but also opening up the nature of their friendship, and their own fragile egos. Reza’s dialogue, translated into racy and occasionally coarse English by Christopher Hampton, coruscates and dazzles, the lines tumbling out in rapid-fire exchanges that this trio of fine actors handle with enormous finesse. It really is a treat to see Lawson and Havers trade elegantly worded insults at top speed.

The set, designed by Mark Thompson, and unchanged since the original production, is simple: the interior of Serge’s flat, with occasional deft changes to represent Marc or Yvan’s flat. The bare surfaces are illuminated by a light which throws the shadow of some venetian blinds on the walls, the diagonal lines echoing the barely discernible diagonals in the painting. Like the painting, it’s an almost bare canvas for the actors to limn with the rich colours of Reza’s words.

Although the play revolves around the cut-and-thrust of argument, one intriguing aspect was Reza’s use of the old Shakespearean device of the soliloquy. In the midst of an exchange, one of the three would be picked out by a spot, revealing his innermost thoughts to the audience, often counterpointing or undermining the ongoing dialogue. In this way, the explicit realism of the piece was subtly undercut by these flashes of insight into the raw feelings of the characters. The changing dynamics of the relationships between the three men form the central focus of the play, and lead to an inevitable crisis with the painting at its heart, but the great joy of this piece is really the way in which the characters interact and try to second-guess each other’s motives and reactions. Lawson’s tough carapace as Marc crumbles as he reflects upon the effect of his dismissal of his friend’s regard for the painting; Havers endows Serge with an oily charm, but also a volcanic anger that erupts at regular intervals; Tompkinson, a study in awkward physicality as the gauche Yvan, brought the house down with his lengthy rant about the complicated arrangements for his forthcoming marriage.

That speech, like many others, elicited waves of laughter from a packed Lyric Theatre audience, and this felt like a genuine comedy. So it’s surprising to reflect that, twenty years ago, when Reza picked up her Evening Standard Award, she was somewhat bewildered: “It is intriguing to win the prize for best comedy,” she said, “as I thought I was writing a tragedy.” Perhaps the English sensibility refuses to see the wrangling’s of three middle-aged men over a painting of questionable value as anything other than comic. But this intense play, lasting less than ninety minutes, allows us plenty of time afterwards to reflect on its exploration of friendship and masculinity. And it also offers us the experience of three consummate actors at the height of their powers in a thought-provoking compact jewel of dramatic art.