Opera is the marmite of the arts world. People either love it with a passion or they can’t stand it. Opera North’s production of Puccini’s classic opera (dir. Phyllida Lloyd) is no exception and will provoke strong reactions from casual viewers. Some will love the history of the production, while others will be rendered soporific. Some will appreciate the vocal power of the performers and the majesty of the orchestra, the sumptuousness of the set design and the pageantry of the costumes, while others will wonder what on earth they’ve signed up for and where in God’s name the nearest exit is.

The story of the opera is amazingly light. Reimagined in the youth culture of Paris in the 1960s, four friends—Marcello (Yuriy Yurchuk), Rodolfo (Eleazar Rodriguez), Colline (Emyr Wyn Jones), and Schaunard (Henry Neill)—all starving artists of different sorts, huddle in their decrepit apartment in search of firewood. Their landlord breaks down the door, demanding the rent. 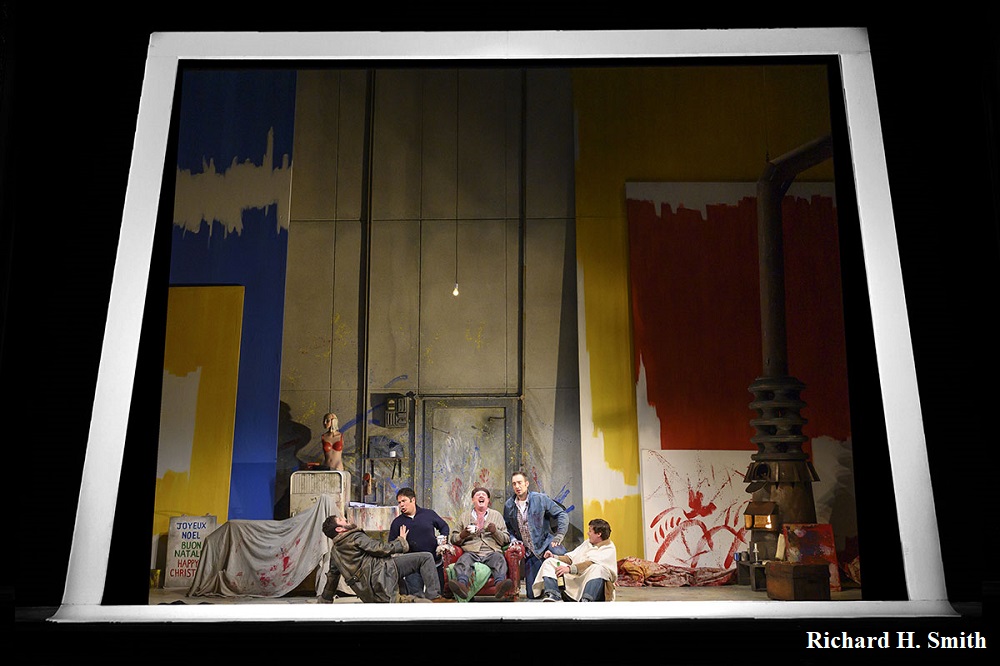 They promptly get him drunk and throw him out. The others leave for a café, while Rodolfo stays behind to work. He bumps into Mimì (Lauren Fagan), their next-door neighbour in poor health. They begin a whirlwind romance, until their eventual estrangement and her withdrawal into illness. Meanwhile, Marcello has his own romantic sub-plot, as he plots to win back his former lover Musetta (Anush Hovhannisyan), a fickle and famous singer.

For someone new to the world of opera, the thinness of the plot (more like a collection of scenarios) is surprising. When one thinks of opera, one’s mind immediately conjures up rich historical fables. To learn that La Bohème is, in essence, the operatic equivalent of an episode of Friends is a bit of a revelation, then. Moreover, this surprise could be taken in one of two ways: either it will play to the opera’s advantage and make it more relatable to a modern audience, or it will be oddly deflationary and remove much of the mystique surrounding the music. The production certainly attempts the former route, though the use of electronic screens with a translation of the lyrics from Italian to English on both sides of the stage ultimately proved a distraction. It was preferable to close one’s eyes, focus on the vocal performances and simply let the music speak for itself.

What everyone should agree on, however, is that the performers are all amazing presences on the stage, with such powerful vocal skills that all must be praised as excellent singers. (And—something which I had not considered before—they all give accomplished dramatic performances to accompany their singing, in the typically over-the-top style of Italian opera.) Similarly, the orchestra under the direction of conductor Renato Balsadonna was superb and proved that one could understand the story by listening to the music alone. The set design was also impressive (particularly the fire on stage!) and the high production values were evident, with the theatricality of the production often shining through; though at times this jarred with the absolutely minimalist plot.

La Bohème is liable to be mixed bag for first-time operagoers, as it’s not what one expects from opera and might prove confusing. However, one could equally argue that this is a good thing as it challenges audiences’ prejudices of what opera is about and who it is for. It was gratifying to see quite a few younger people in the audience, though the overwhelming age, ethnicity, and accent of the crowd was exactly what one would expect. Overall, while the production has panache and elan in spades, one is left with the feeling that, if it wants to reach a wider audience, it would do better to simply showcase what makes opera one of the most impressive and powerful art forms – namely, the singers and the musicians – and to spend less time on the bells and whistles. https://www.operanorth.co.uk/