The very word reinvention can hide a multitude of theatrical sins but a genuine revolutionary like Charlotte Bronte would have no problem with anyone adapting her material in a search for originality.

But whether Bronte would have been happy with Linda Marshall Griffiths’ radical - but flawed - ‘reinvention’ of her later novel of loss and desolation is debatable.

Marshall Griffiths has left the name of Charlotte’s principal characters, but little else although she thankfully dispenses with the bonnets, Instead she sets her version a hundred years in the future as virologist Professor Lucy Snowe (Lucy Elsworthy) tips up at an archaeological dig at Villette where the team are looking for the remains of the mythical Lady of Villette who might hold the key to a virus that has decimated humanity. 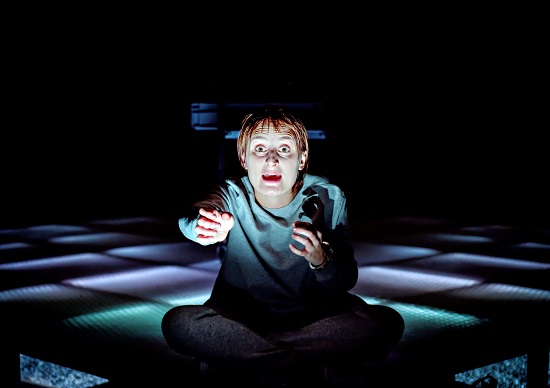 The twist is Lucy is a clone who has lost her two sisters – see what Marshall Griffiths did there – to the plague and is haunted by losing them. Elsworthy is on stage pretty much on stage throughout and, while there is no doubting the power of the performance, it is also intensely irritating. Director Mark Rosenblatt does cleverly allow her to verbalise Snowe’s inner voice, but fails to tone down her collection of tics and shouty outbursts that only detract from her strong acting.

Rosenblatt has gone full 1984 as the stage is dominated by a massive screen full of security footage manipulated by the sinister Beck (Catherine Cusask). Assuming that in 100 year women have achieved full equality Rosenblatt may be trying to replicate the strict patriarchy that so restricted the Bronte sisters, but it seems a lot of effort for little return.

There is a lot of bad science in Villette as one of the reasons sci-fi remains such a popular genre is even in the flights of fancy there is still some sort of technical logic to it all no matter how futuristic. Here, it is never clear whether Snowe is a clone, a cyborg or a bit of both. It might not seem to matter, but this confused thinking means that Snowe’s reaction consequently seem inconsistent because if you going to go dystopian then at least think bother to think it through.

Plus no-one seems to have noticed the original Professor Snowe was remarkably young to hold a university chair before she was cloned.

Elsworthy is at her best interacting with the unit doctor John Bretton (Nana Amoo-Gottfried) who seems strangely attracted to the twitchy ‘clone’. The scene where Snowe tries to make sense of a family Christmas with Bretton, who she is falling for, and his mum is a bit of welcome light relief.

But it isn’t until deep into the second act where Snowe and her equally socially inept potential lover Paul (Philip Cairns) endure a stilted picnic that you get sense of how deep the loss of her sisters was to this fragile semi-human. This is beautifully played by Elsworthy and Cairns, but the text really needed much more of this insight.

Marshall Griffiths and Rosenblatt have been brave trying to bring Charlotte Bronte into the 21st century, but the problem they have is the Bonnet brigade will think this is sacrilege and non-traditionalists will be like the woman in the interval who said to her mates: ‘I’m really struggling with this.’ Quite.