Bad Girls The Musical, performed by NE Musicals York, is a hard-hitting and thought provoking musical that packs a powerful punch. This emotional roller-coaster of a musical had the audience laughing at the dark humour of the prison inmates one minute then welling up at the struggles of individual characters the next. This production is not for the faint hearted!

Set in ‘G Wing’ of a female prison, Bad Girls The Musical charts the journey of the prison inmates and its staff. Initially it follows the story of vulnerable Rachel Hicks (performed effectively by Ellie Hicks) and her struggles to adapt to prison life. Trying to help her is the new Wing Governor Helen Stewart (Susan Blenkiron), but she is thwarted by long time prison officer Jim Fenner (Steve Tearle) and his side-kick Sylvia “BodyBag” Hollamby (Rebecca Warboys). 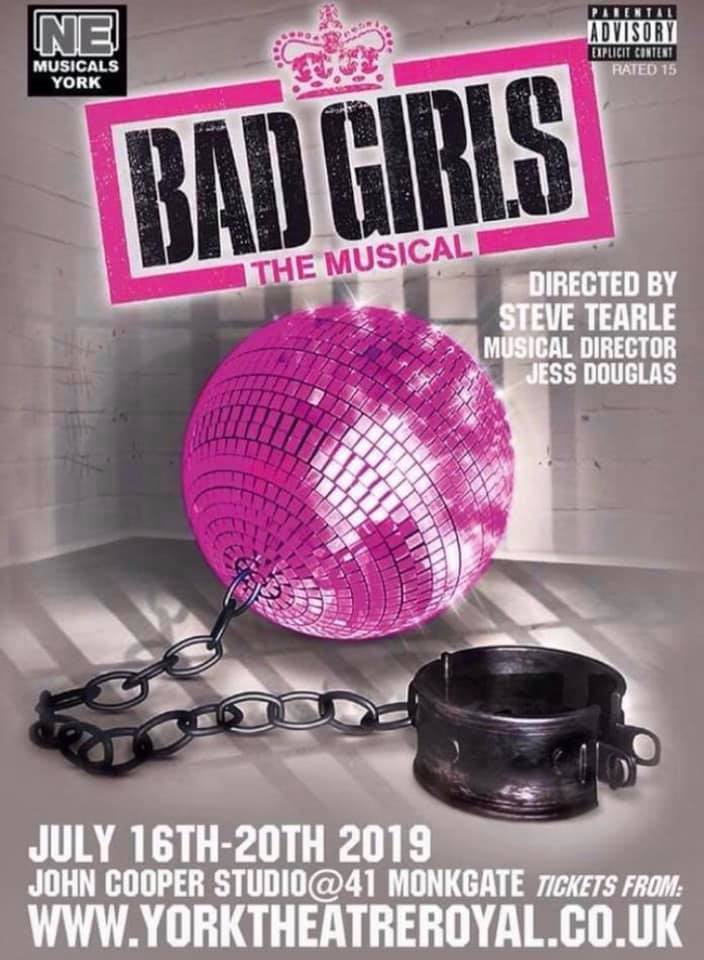 The performances in this 24-strong cast were of a high quality and every person on stage was committed to their performance and had a clear and consistent character. The chorus numbers were particularly strong and the harmony work was consistently good. The staging and choreography worked very well; the John Copper Studio is not a large space but the space was used very effectively. Having the prisoners and staff constantly walking around the upstairs walkways added an atmosphere of menace and constantly reminded the audience that they were in a prison. The finale of Act 1 was a brilliant ensemble moment, as the prison wardens were desperately trying to stop an imminent prison riot.

Special mention must go to Emma Louise Dickinson as the powerhouse Yvonne Atkins; her confident performance lifted the action whenever she was on stage. Fiona Baistow as the nasty and manipulative Shell Dockley and Maia Stroud as Denny Blood, her insecure and damaged side kick, provided a constant threat. The comic coupling of Pat Mortimer and Clare Medley as the ‘Two Julies’ worked very well, and Claire’s tender rendition of ‘Sorry’, an apology to her young son, brought a tear to the eye. Perri Ann Barley as Nicki Wade and Susan Blenkiron as Helen Stewart carried the fraught and complicated romance between prisoner and officer well, and their duet in Act 2 ‘Every Night’ was movingly performed. Steve Tearle as Jim Fenner, had the unenviable job of portraying the manipulative and ruthless Jim Fenner. This character is so unlikeable and horrific, with no redeeming feature, yet we still enjoyed his moments of sequins and dancing!

The odd first night glitch was evident, with sound issues happening at points throughout the performance and some technical cues not feeling as slick as they could be, but I am sure these will have been ironed out in future performances.

Overall this is a challenging and different production that yo-yos from the serious and heart-breaking nature of a woman’s prison to fun and frivolous song and dance numbers. The cast worked hard to create a solid and memorable performance that they should be proud of.

Due to its adult themes and explicit language this production is suitable for an audience of 15 years and over.