As an avid fan, I can state Du Maurier is the mistress of manipulation and this production of My Cousin Rachel unfortunately misses the mark, lacking the danger and suspicion that is evident in the gothic novel and expected from such a great author who also wrote Jamaica Inn and the literary masterpiece, Rebecca. However, the production does have much to offer the traditional British Theatre audience.

The story is one of intrigue, a glamorous Italian Countess, recently widowed, arrives from Florence, at her late spouses’ home and estate. The now heir to the house, Philip (Pip) is suspicious and suspects her of foul play and involvement in her husband; his cousins; unexpected demise. Philip becomes obsessed with the beautiful Rachel and a story of romance, death and suspicion unfolds based around the question of Rachel’s guilt or innocence. Why has she visited her late husband’s ancestral home? With these essential elements the stage is set for a bubbling thriller but yet the promise is never fully realised, often resulting in a bland and overly wordy simmer. 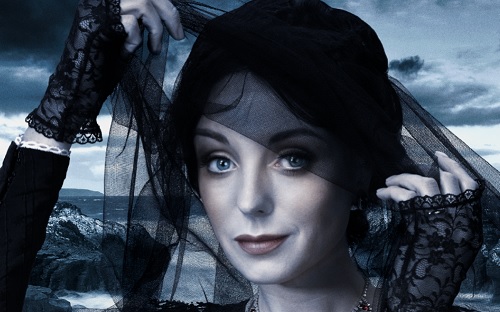 The revolve set designed by Richard Kent is wonderful, depicting the isolation of Bodmin and the tempestuously rugged Cornish coast, so adored by Du Maurier and then revolving to show the interior of the ancient Ashley family home and gardens. It is this towering set that has the most noteworthy presence on stage. The subdued lighting, real candle and firelight, frequent haze plus a strong underscore adds to the eerie ambience and creates an atmospheric and stifling sense of unresolve.

This adaptation by Joseph O’Connor certainly has the ambiguity needed of a psychological thriller, and the cast under the direction of Anthony Banks work hard, however, there seems little opportunity to attach emotionally with the characters. Maybe this is a case of the stage being unable to utilise and sustain the lengthy description of the novel.

Helen George is physically beguiling as Countess Rachel Sangalletti, as she owns each scene with her enigmatic femme fatale presence, however the darker flaws of Rachel are not explored or highlighted. She does highlight the ways in which historically women had to use their wiles to survive in a male dominated environment. Her voice is strikingly articulate and her harshly precise modulation adds to the audience’s sense of uncertainty in her character.

Philip Ashley played by Jack Holden packs a powerful punch in performance with great gusto and a naive innocence in role, yet I felt his change of emotions come rather too forcefully and unnaturally. The understudy Andy Hawthorne played the role of Nicholas Kendall, on the night I saw the show. This is a well written character and Hawthorne did well to show a man torn between loyalty to the young heir and his suspicion of the mysterious Rachel. Sean Murphy playing John Seecombe and John Lumsden as Thomas Connors perhaps gave the most convincing and relaxed performances of the night and the audience warmed to these portrayals immediately. They were the glue that held the story together.

All in all, a good evening’s entertainment, with solid performances and a superb set, but not one that had me riveted to my seat in anticipation, it all seemed too predictable and without a precarious force.