A Monster Calls is adapted from the award-winning teen novel by Patrick Ness which was originally inspired from an idea by the late Siobhan Dowd. Originally made into a film and now a stage show, A Monster Calls is a modern day fairytale and tells the poignant story of the 13-year-old Connor. Connor is bullied at school and is struggling with the effects of living with his terminally ill mother as life obliviously carries on around him. Perhaps for his own protection or perhaps because as a society words fail us, no one speaks to him about his mother’s illness and no one tells him the truth. This is the emotive power within the piece as we can all relate to this – what to say and when. Connor has retreated into himself and is filled with his own inner demons and regular nightmares. He is then antagonised, as a real monster calls. From the ancient Yew tree in the churchyard hails the monster who through three fables confronts Connor to find his own truth and acceptance. With fables that are as twisted and complexed as the gnarled old tree itself and also the workings of the human mind, Connor, in a moment of enlightenment at the very end, unravels the purpose of the Monsters visits. 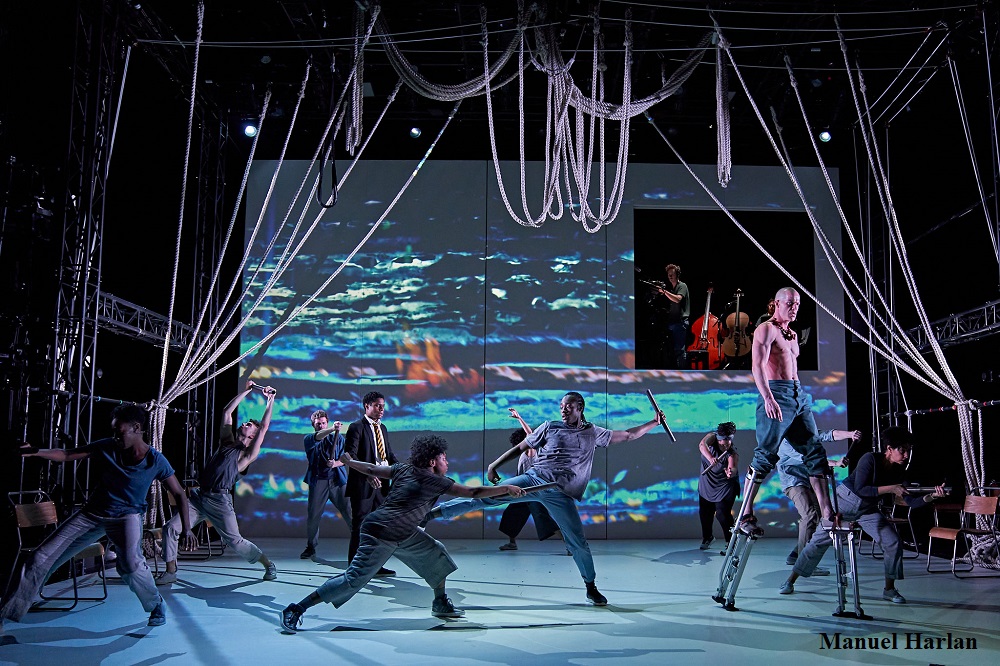 A Monster Calls beautifully directed by Sally Cookson with clever Set Design by Michael Vale and exquisite Movement Direction by Dan Canham offers a visually compelling story with emotional life lessons that has an extraordinary power. The staging is minimal yet spectacular with ropes hung from the ceiling that are twisted and wound to create the Yew Tree and other minimal props such as clocks, seatbelts and steering wheels. Chairs are used at the sides of the stage as the unified cast remain visible throughout the play, undertaking multi characters and stunning physical theatre. The band is purposely present on the sparse stage and it’s enticing, musically ambient, cacophony adds to the haze around Connor but never directly speaking to him. The score, composed by Benji Bower and the embedded performance by musicians Luke Potter and Seamus Carey, has a modern electronic sound and gives the play an ethereal fairytale feel. The musicians take their bows onstage with the rest of the cast highlighting the importance of the emotive sound within the story.

The impressive cast is equally strong and by every sense of the word, an ensemble. But, special mention must go to a very talented Anmar Duffus as Connor, who shows command and passion throughout. Duffus epitomises the inner complexities of the tormented youth in the face of adversity. Keith Gilmore has excellent stage presence as the Monster and is both imposing and intimidating. His physicality and strength whilst suspended in the ropes almost gravity defying at times. Greg Bernstein as Harry, Kel Matsena as Anton and Jade Hackett as Sully evoke an uncomfortable response from the audience, as they portray the bullies with psychological detail. Both Kaye Brown as Grandma and Maria Omakinwa as Mum portrayals are very identifiable yet opposing, female characters whose dilemma and desperation is almost tangible. It was Kaye Brown’s performance in the second act that resonated with me most and brought a tear to my eye.

As theatre should, this play has left me reflective. This is more than just a tragic story of a boy, it is an intense journey into the complexities of morality, a journey into self-discovery and human contradiction. A Monster Calls addresses big moral issues and even bigger ethical matters, the play left me enlightened and with a thought provoking realisation of the complexity of a human being. Do not miss this, it is an extraordinarily stunning visual and majestic piece of theatre with a message that has the ability to be profound.