Making their theatre début as a company, Jack Of All Trades (JOAT) gave us our first glimpse into their work in Liverpool this week with their devised piece, Knockaloe.

The writer of the piece, John Smith, also took on the responsibility of our lead figure of the play, the jittery and lively Klaus Faber, a German trapped in the Knockaloe prison camp in Peel, on the Isle of Man.

Faber was one of many Germans that were shipped out to the camp by the Brits during World War One following the sinking of the Lusitania. In response, the British people, in a bid to ‘protect’ King and Country, ferried all German males that had become part of British communities to the Knockaloe camp as suspected German spies and sympathisers.

In his four years in the camp, Klaus becomes part of a swelling community of Germans and Turks sent to Knockaloe by the British.

In his confined and dingy hut on the island, Klaus’ artistic creativity thrived. Smith’s performance as the titular German interacted with the audience directly in the small performance space to bring us straight into his story. 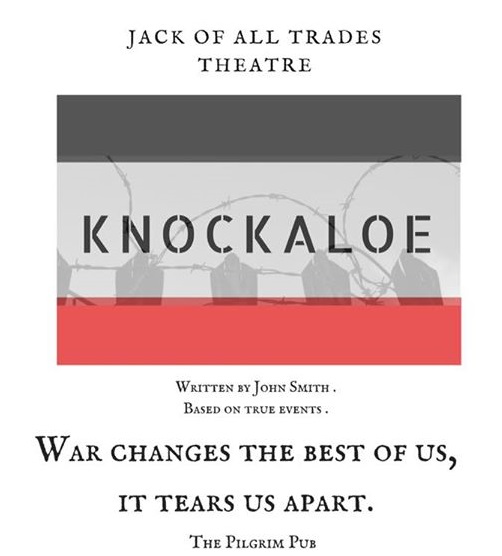 The energy that Smith brought to Klaus was very apparent, and despite a couple of small stutters on lines throughout, he covered for each extremely well. There were times where his energy reached such points, that the pace may sometimes have just benefited from being slightly slower from time to time to allow the audience to keep up with his stories.

We also meet the character that becomes his favourite worst enemy, the delightful dog he names ‘Frankfurter’. Frankfurter was portrayed through some very entertaining and creative puppetry from Murren McFarlane, creating an entertaining spectacle between the two characters as Klaus haplessly tries to gain control of his new friend in his island hut in the middle of the night.

Credit in this regard and throughout the performance must also go to director, Meg McFarlane, who  clearly has a keen eye on the detail of the dialogue and how the characters compliment each other.

However, far from a simple comic struggle between the two, Klaus shared with the audience how his time in the camp has taught him many things about war and what its values are.

The deeper message he brings across through stories of a Turkish soldier reluctant and fearful of going to war; the struggle he and his wife encounter with British people during the war, and of a 10-year-old French girl caught in the conflict in Lille in France, paint a picture of what war can do to tear relationships, people and society apart.

Klaus’ encounters and stories of how WWI was able to shape both people and nations begged the million-dollar question that was the point of his tales: “What is this war for?”

One major strength that both the performance and the company shared was the attention to detail and research on their chosen subject for their piece.

It was clear throughout that a lot of work had been put into understanding a vast and complex subject and that there was a real grasp of the issues that those German and Turkish men faced in their depressive and claustrophobic cages.

Furthermore, it was a refreshing change to see a different perspective of what happened within the British Isles during WWI, and those men whose liberty, creativity and livelihoods were pressed into these internment camps.

Particularly for a debut project, the dialogue written by Smith showed clear potential for future endeavours.

Whilst there were a couple of slightly stuttering scene transitions (particularly where Klaus interacts with voice over moments with the young French girl, Adele), with some polishing of on-stage technique and some small tweaks to direction that will come with further experience, it is clear that Smith, Meg McFarlane and Murren McFarlane have given those who watched the performance an insight into the clear potential that the company has to develop future projects.

What JOAT have been able to showcase is an obvious ability to write, perform, and bring a project together, which is the foundation on which they can broaden their abilities with further theatrical experience.