Made in Dagenham - Byrchall High School, Ashton in Makerfield

NADOS present Made in Dagenham, The Musical. Based on the 2010 film, of the same name, it centres around the true-life events of 1968, when women sewing machinists at Ford’s Dagenham plant walked out. The strike developed into a call for equality of pay and is recognised as a catalyst that lead to the Equal Pay Act of 1970.

The film and musical centres around the fictional character of Rita O’Grady, passionately played by Jean Carter for NADOS. She represents the struggles as a working mum and wife but with the added pressure of finding herself as the spokesperson for the machinists, a role she reluctantly takes on. 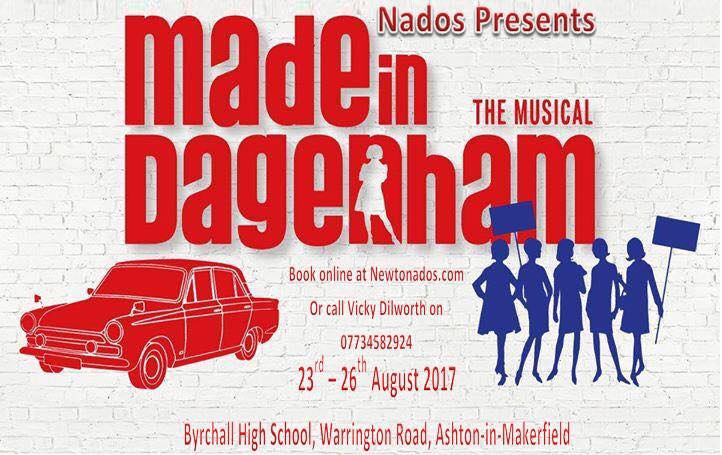 Jean’s performance as Rita, was powerful, believable and very moving. At the curtain call I could see that she, along with many others, had given her all to the performance. Her performance was fully supported by the rest of the cast, of this excellent production. Barry Dilworth, as her husband Eddie, gave an outstanding emotional performance, with a personal highlight being in the song ‘The Letter’. However, I think such a powerful performance should have been directed to the audience, as if we were Rita. Jean and Barry have genuine chemistry on stage, I really cared about them and their family throughout the show. Sophie Butterworth and Harry Thompson, as their children, deserve a mention here. They both gave fantastic character performances, but it was Harry’s beautifully, clear treble singing voice that stood out to me, definitely a star in the making!

There were some obvious nerves and a few minor pitching issues, I will put this down to first night nerves, but everyone on stage gave of their best. There were some issues with sound and lighting - some cues were slightly late and some people couldn’t be heard; but these are things that can be adjusted and are problems every company faces from time to time. I thought the band, under the direction of Bethany Dilworth, were exceptional. However, due to their central position, on the same level as the audience, sometimes their performance drowned out the actors and singers on stage - especially in the very complex whole cast numbers. Their position also meant, from where I was sitting, the musical director blocked some of the actors - this was irritating. I only say this because there was so many good things happening on stage, they deserved to be fully seen and heard.

Made in Dagenham, adapted by Richard Bean, at is very core has strong female characters, with many of the male parts being archetypes of the attitudes towards women seen in the 60s and 70s. For me, there were some stand out performances tonight: Vicky Dilworth (as Beryl), Em Fairhurst (as Clare) and Tracey Barham (as Connie Riley) gave great character performances, maintaining their role even when they were not the focus, well done ladies! Andrew Marsh (as Sid, Aide and Cortina Man), demonstrating great comic timing and versatility in his performance. Another great comic performance was Joey Wiswell (as Harold Wilson), it was like watching Peter Kay doing an impression of the former Prime Minister, impressive! A special mention needs to go to Jackie O’Leary from the ensemble, her smile when she played the Statue of Liberty light up the stage.

Finally, I must mention Lisa Griffiths, the dynamo of this production - Director, Choreographer and actor (as Barbara Castle). Taking on one of these roles is hard enough, but all three, outstanding!

This was a very enjoyable performance, from a very talented cast and as NADOS state on their website: “Our philosophy is that just because we are an amateur society, it doesn't mean our shows need be "amateur" too!” They definitely achieved that tonight. Made in Dagenham continues until Saturday 26th August.