Agatha Christie’s Witness for the Prosecution – The Hope Street Theatre

It’s always good to take a well-established piece of theatre and breathe new life into it but it transpires this was not the only thing being refreshed when I caught up with Mike James of Alsop Drama and renowned local director Sarah van Parys to discuss their latest production: Agatha Christie’s Witness for the Prosecution.

The compelling stage play, adapted by Christie from her own short story, follows Leonard Vole who has been accused of killing a widow to inherit her fortune and only time will tell whether he can convince the jury – and the audience – that he is an innocent man: audiences are sworn to secrecy on the ending.

Alsop Drama have a reputation for breaking the mould of amateur theatre and this production is no exception as James elaborates. 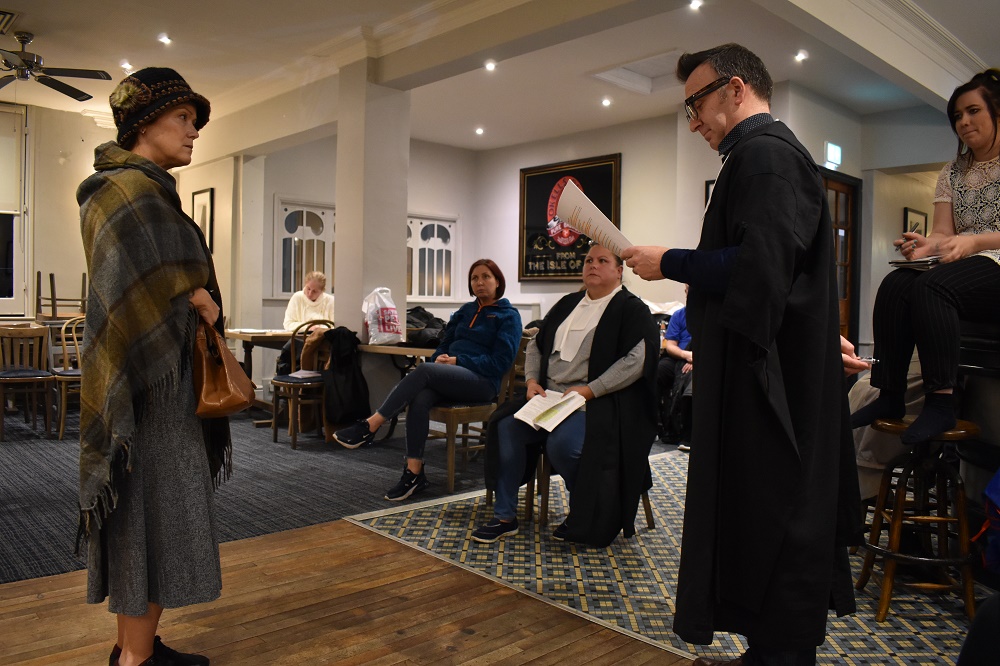 Having been formed some sixty plus years ago at the namesake high school in Crosby, for the last fifteen years they have operated from a range of venues in the city centre with their last production some three years ago as part of the Liverpool Irish Festival at the World Museum. A hiatus followed with questions over direction and identity coming to the fore as they considered a swansong performance before calling it a day.

Thankfully that thought disappeared as van Parys’ stylised vision for the play suddenly breathed new life into the company which at its heart is one large family, often involving real-life partners and children. The injection of proven local actors such as Lee Burnitt saw in an exciting blend of old tradition and new thinking resulting in a delightful re-imagining of a great piece of theatre and the rebirth of a wonderful company.

Turning to the play itself, van Parys notes that publishing restrictions forced her to abandon her initial idea of bringing it into the 21st Century and reconsider its 1950’s London setting which she realised was in fact the key to the story whilst the issues it touches upon such as class remain as relevant today as they were then – you only have to look at the Brexit debacle unfolding on a daily basis to see that.

What van Parys has done is reimagine the setting through the staging and design which comes as no surprise as she has always struck me as a very visual director and why she is so popular with local writers wanting to bring their work to the stage. She is modest enough not to take all the credit acknowledging her close working relationship with Set Designer Chris McCourt. Her analogy that the relationship between writer, designer, and director is like a blind date – you need to be on the same wavelength if it’s going to be a successful relationship – is perfect. She’s not risk averse either, and I like her confident approach in trusting the rehearsals process to allow ideas to develop and evolve. She has also taken full advantage of the flexibility of The Hope Street Theatre to immerse the audience fully into the action of the play and appreciate it from a completely new angle. Like the ending of the play, I’m sworn not to reveal any more so come and find out for yourself: you won’t be disappointed.

Alsop Drama are an exciting company with a bright future. Further information available via https://alsopdrama.co.uk/

Agatha Christie’s Witness for the Prosecution directed by Sarah van Parys performs at The Hope Street Theatre on Friday 8th November at 7.30pm and on Saturday 9th November at 2.00pm and 7.30pm. Tickets are priced at £10 (£8 concessions) and available via Box Office on 0344 451 0622 or online http://hopestreettheatre.com/whatson/