The year is 2540 and the audience at the Wolverhampton Grand are taking their seats in what has become a London Hatchery and we are about to be recruited into a brave new world.

This adaptation by Dawn King of the novel ‘A Brave New World’ by Aldous Huxley explores just how the world may look in 525 years time. Presented by the Touring Consortium Theatre Company and Royal & Derngate, Northampton we are taken on a journey through and beyond London and the state of the art facility where humans are produced using specific genetics pertaining to their ultimate reason for living and the job they are destined to do.

The facility follows the abolition of natural reproduction. Human embryos are raised artificially in "hatcheries and conditioning centres". Children are educated by the hypnopaedic process (sleep learning), and there is a discouragement of critical thinking, individual action and initiative. Spending time alone is considered abnormal and even reprehensible. This indeed is a brave new world.

Away from the facility Bernard (Gruffudd Glyn) an Alpha-Plus sleep-learning specialist whisks Lenina, (Olivia Morgan) away on a trip to a Savage Reservation where they come across John (William Postlethwaite) who disbelieves this new world and still believes in sin and death. Upon discovering from where he came they take him back to London and the facility.

Huxley wrote this novel in 1931 and its content is possibly more believable and indeed achievable today than it was when it was first published and it sets your mind into thinking if indeed this is the future of our world.

A cleverly simple set design and lighting from Naomi Dawson and Colin Grenfell respectively punctuated by video images from Keith Skretch never fail to impress. Add to this George Dennis’s sound design and you have a very impressive production from a technical point of view.

James Dacre has done a wonderful job directing this company of ten with the show seeming to have more of a cinematic feeling rather than a traditional stage production. Clever “freeze frames” allows for multiple locations to be viewed on the stage at the same time, and with original music from These New Puritans it is a show you will remember and ponder over for a while.

Brave New World is playing at the Wolverhampton Grand until Saturday before continuing a UK tour until the 5th December. More information can be found HERE! 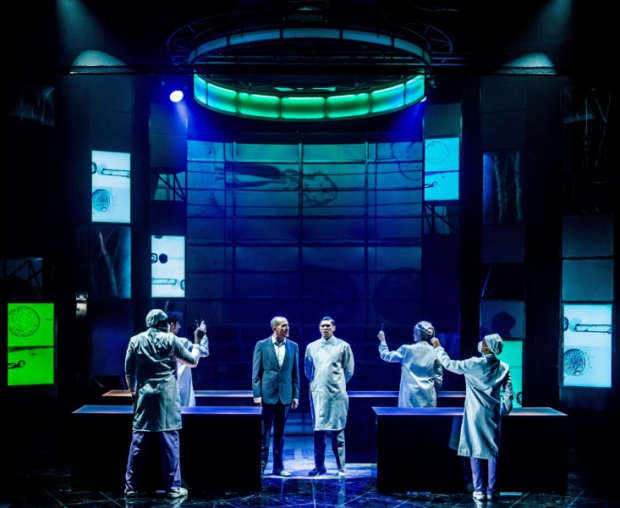