Well, Austentatious: An Improvised Jane Austen Novel does exactly what it says on the tin, with a few surprises. Walking into the Quays Theatre, a smaller and more intimate space within the Lowry Theatre building, the audience were initially greeted by a beautiful violin solo (delivered by Ms Corrina Connor), reminiscent of an opening ball scene in a period drama. Amidst the general bustle of audience members shuffling along rows and flicking through programmes and scrunching up tickets, the performers themselves could be seen, dressed in full Regency costume, fluttering in the wings and murmuring to one another. Two of them then began wandering through the aisles with top hats outstretched, into which the audience threw slips of paper with suggested titles scrawled on them.

The title chosen at random from the hat for tonight’s production, ‘The Baby Lied’, is perhaps an odd one and not the wonderful pun on an Austen novel we had all secretly hoped for, but the cast ran with it to their full ability. However, I must comment that the suggestion mentioned after the interval, and given special credit, ‘The X Files: The Truth Is Universally Acknowledged’, would have been a far better springboard.

Because of the nature of this production, it would be pointless for me to critique the plotline itself too much, as this changes nightly. I would mention that the storyline did begin to feel a bit muddled towards the end as the cast rushed towards a conclusion after perhaps introducing a few too many characters, but the plot was really secondary to the hilarious improvisation. 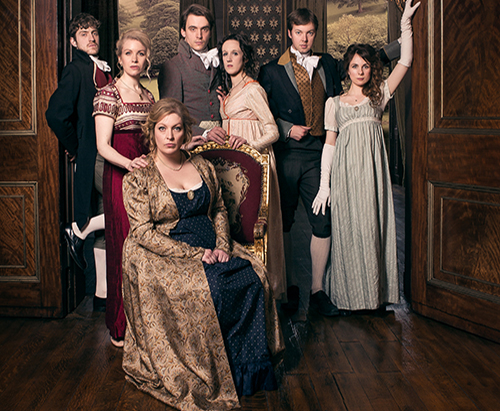 The cast, composed of in this performance by Joseph Morpurgo, Cariad Lloyd, Rachel Parris, Andrew Hunter-Murrary and Charlotte Gittins, were all exemplary. Witty, friendly, and with some cracking one-liners, they worked incredibly well as a team. Through this, they managed to create an intimate atmosphere that felt less like watching a play and more like observing a crew of particularly hilarious friends have a lot of fun. The enthusiasm the actors brought to the piece and the joy they radiated while performing was a delight to watch.

Once again, I would note that the characters and plot got slightly confused as the play wore on, but the performers dealt with this wonderfully by turning mistakes into in-jokes. The funniest moments came not from the ridiculousness the plot fell into (long story short, a man turned into a goose after kissing the possible Anti-Christ but was then revived by drinking the blood of Billy-Bob Thornton – it made slightly more sense if you were there), but from the meta-theatricality of the actors constantly being aware of the improvisation and pulling one another up on mistakes and hesitations.

The thing I love about theatre is that every performance is individually and wonderfully unique, never to be experienced in the same way ever again, and shows like this take that experience to the extreme. ‘The Baby Lied’ will now be lost forever, preserved only in memory, but I would strongly recommend seeing Austentatious nevertheless. Although I can’t tell you quite what you’ll get, I can assure you that it will be hilarious.