My Country; A Work in Progress - Liverpool Playhouse

As we wait to discover - as one character notes - what Brexit even means (aside from Brexit!) Rufus Norris and Carol Ann Duffy have produced a show which gives the voiceless a voice.  My Country weaves together conversations about the EU Referendum from across the country to explore this divisive topic.

The premise is straightforward; Britannia (Penny Layden) has brought together a selection of her constituent parts to discuss the forthcoming Referendum. The conversation ranges from bendy bananas to benefits; multi-culturalism to cereal (courtesy of Layden’s wonderful Boris Johnson), as the assembled await the result and their fate -poignantly expressed in the case of Scotland and Northern Ireland.  Present for the evening are Cymru (Christian Patterson), South East (Adam Ewen), Caledonia (Stuart McQuarrie), North East (Laura Elphinstone), East Midlands (Seema Bown) and Northern Ireland (Cavan Clarke) who provide us with ‘the story of this time in the peoples’ voices’. 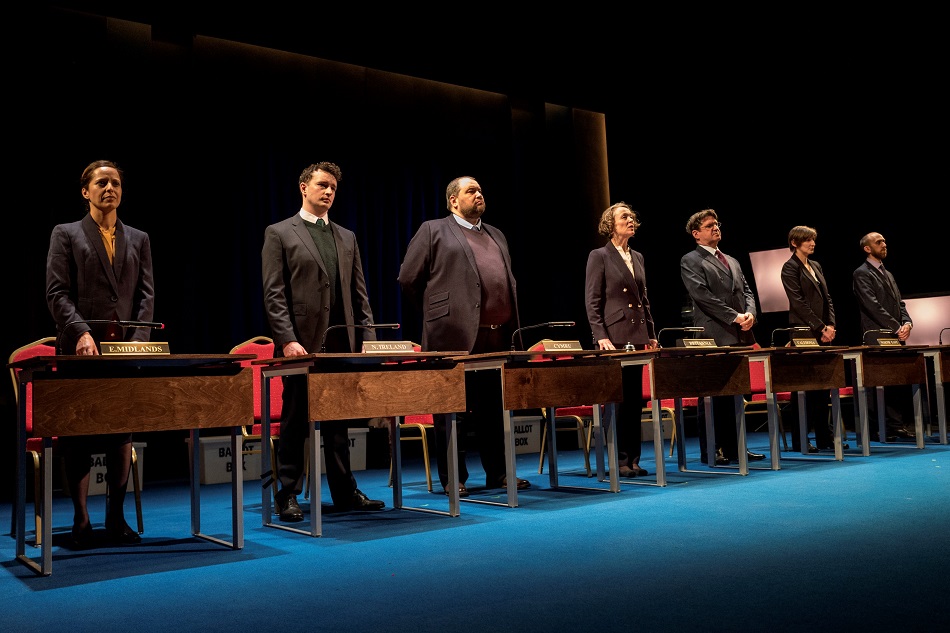 The company are excellent, seamlessly shifting from one character to the next emulating physicality, vocal inflections and linguistic fillers. These errs, yeahs, likes and erms punctuate the piece, becoming a poetry in themselves, providing a realistic sound more likely to be heard down the shops than in the theatre.  Unlike the music that underscores the production (an eclectic mix of Elgar, Frankie Goes To Hollywood, Shirley Bassey and Bread of Heaven) the monologues shared are not easy listening.  They are fractured, fractious in parts and frightened, highlighting how far from united we currently are.

Norris and Duffy cleverly juxtapose the monologues so they appear to converse with one another, finding common ground and contradictions and allowing the audience to listen (as Britannia instructs us to at the start). There are notable absences from Britannia’s assembled representatives, some voices it would appear are not ready to be heard. One could also be forgiven for thinking that the East Midlands is the only area of the country where people who aren’t white live. However, on the whole this ambitious project contributes to the dialogue surrounding the EU Referendum highlighting the absurdity of the politicians’ rhetoric and the reality of the aftermath.

The show is not all doom and gloom with Duffy and Norris finding moments of humour and light relief – the picnic is delightful.  In the shows final moments Britannia implores us to ‘strive for good leadership’, a particularly evocative statement in the current political climate.