Giselle is arguably one of the most famous romantic ballets and has been performed all over the world since the 1800s. The original tale of Giselle follows a peasant girl who falls in love with the wealthy Albrecht. In this adaptation we see Giselle (Tamara Rojo) as a migrant worker in a garment factory which has faced closure. A large wall blocks the workers prospects and any opportunity whilst keeping Giselle and her lover Albrecht (James Streeter) apart.

The lovers, desperate to be together, face the harsh reality of the world they live in where Albrecht is engaged to Bathilde (Begoña Cao) a wealthy and judgemental woman. They must also contend with a class divide that stops them from being together.

Akram Khan has taken this traditional ballet to new territories as he combines a mix of contemporary dance, traditional folk and classical ballet. It is wonderful to see pieces being rediscovered and reinterpreted to suit contemporary audiences and this production certainly achieves this. 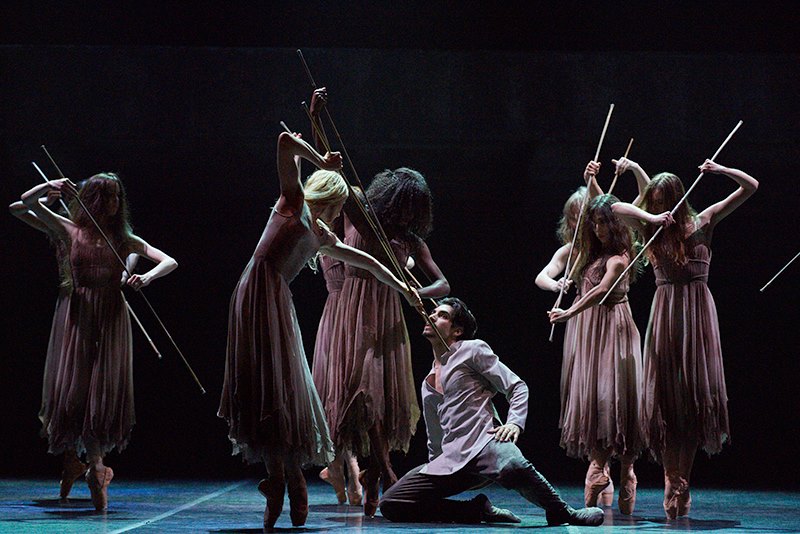 The audience is transported to a dystopian world which feels scarily not too far from our own. The class divide between the wealthy landlords and the workers is hammered home by a clear difference in movement, in particular the mechanical style of the workers reflects the factories in which they work.

Minimalist staging allows for the cast to shine on the bare stage as they fight with the wall which divides them. This is not only effective but fascinating to see how much presence the cast have on stage. Giselle (Rojo) and Albrecht (Streeter) show both trust and passion particularly in their duet in Act 2 when they show such tenderness within their movements. They cling to each other and balance so effectively within poses it is easy to imagine the two are lovers who are desperate to be together. The open stage also allows for the dancers to utilise fast, exaggerated movements in a large ensemble further creating a manic atmosphere with impressive force. As the ensemble weaves in around the principal dancers the audience is faced with building rhythm from the dancers’ feet and the piece heightens into various crescendos which make the hairs on your arm stand up. The Pointe work in Act 2 is outstanding and Myrtha, Queen of the Wilis (Stina Quagebeur) makes it look effortless with an ethereal quality.

The muted stone colours of the costumes allow the audience to focus on the dancer’s movements and gives a stark contrast to the wealthy characters as they enter with their outrageous regalia. The contrasts within this production continue with the consistently dark lighting which only brightens at a few well chosen moments such as the lovers duet. It highlights the dark side to this ballet which Khan has chosen to focus on and bring to the audience’s attention.

Adolphe Adam’s original score is modernised by Vincenzo Lamagna and incorporates a heavy amount of drums within the score so that has become an almost electro orchestral piece. This creates a manic effect mirroring again the machines in the factory and when there are pauses in the music the audience is left breathless waiting to hear more.

This is a mesmerising and atmospheric production which is so culturally relevant to today’s society that it had the entire audience in a standing ovation. A triumph for the English National Ballet.