Every year the Royal Court entertains theatre goers with their Christmas show. This year is no different and the theatre has gifted the city with another treat in the form of a spoof on the traditional Nativity. This Scouse version sees the events take place around Liverpool. Having attended previous Christmas shows I knew I was in for a treat but this year outdid itself. This grown up pantomime is full of laughs and you can see the cast enjoying the show just as much as the audience. The writing was of a high standard and allowed the cast to play around with the script and make it their own. Some of the best moments felt ad-libbed and the energy that the cast put in was felt by all.

Following the Angel, Angela Gabriel (Lindzi Germain) who is desperate to get bigger wings, we watch her bring Mary (Hayley Hampson) and Joseph (Michael Fletcher) together. She is helped by the shepherds (Stephen Fletcher, Andrew Schofield, Keddy Sutton) who play a whole host of characters effortlessly. 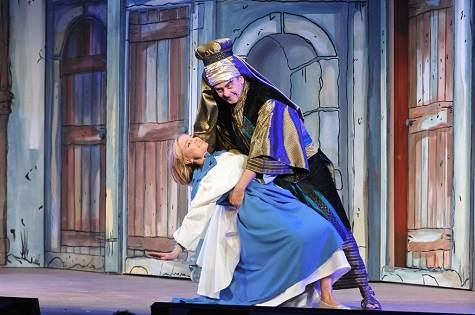 Herod (Paul Duckworth) tries to stop the pair from falling in love and attempts to harm baby Jesus and is the archetypal pantomime villain. This well-known narrative is transformed well by the cast and transposed into a ‘Scouse’ nativity through their phrasing and the songs they perform. From the first number the audience was clapping and singing along and the cast played up to this through their further engagement with audience members.

The cast excel at their roles, from Herod’s (Duckworth’s) range of impressions which had the audience in fits to Mary’s (Hampson) singing which beautifully filled the room. The three shepherds were the stars of the night though as they easily took on a variety of roles and showcased their talents. They did this effortlessly and you can relax knowing that you are watching a cast who are totally in control.

The set was a treat and the design was striking and suited the piece exceptionally. It enabled the actors to interact with all elements of it and could be seen as the star of the show. It was a real highlight and when the set was first revealed audience members gasped. The music was an added bonus with songs being transformed to suit the piece and to enable the performers to highlight their many talents. The range of songs suited all tastes and allowed for sing a long moments which is a must at all good Christmas shows. The choir helped the cast bring the songs to life as their voices helped fill the auditorium and made a couple of songs very moving and poignant.

The utilisation of farce within the piece was engaging and members of backstage were utilised well to bring another comedy element to the piece. One member of the cast that stood out was Sutton whose various characters were engaging and well thought about.

The only element of the piece that seemed to go off course somewhat was the Jeremy Kyle spoof which although at first was engaging seemed to divert the audience’s attention slightly as it was a lengthy scene. Overall though, this piece is entertaining, hilarious and witty and all performers have worked hard to entertain audiences with their various characters. With the city full of Christmas shows it is often hard to pick which one to see but I know that this show is at the top of the list.