It doesn’t seem 5 minutes since the incredible Bat Out of Hell The Musical was playing to sold out audiences night after night during an extended world premiere season. With the show now in Canada after an equally successful West End debut Steve Steinman bring his superb Meat Loaf Story home to the Opera House in Manchester.

Steinman, a local lad is joined on stage by a sensational 5-piece band who belt out the greatest Meat Loaf songs throughout the evening. He is also joined by singers and dancers Hayley Russell and Victoria Jenkins, who tonight were faultless from the opening number. 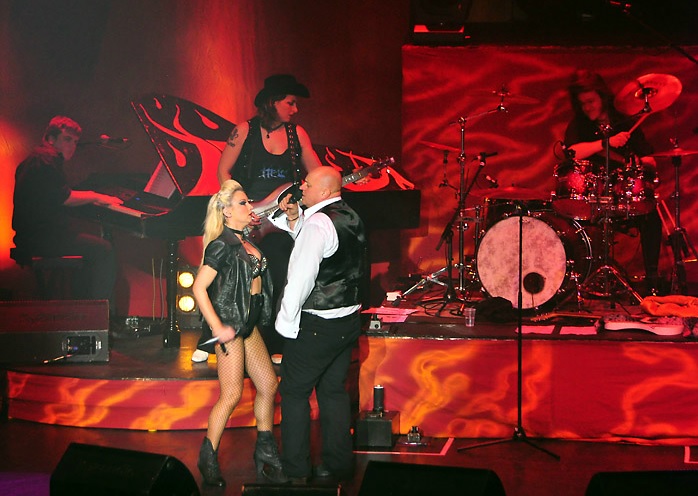 It has been 25 years now since Steinman first took this show on the road after appearing on ITV’s Stars in Their Eyes as the iconic Meat Loaf. Having seen this production before I knew what to expect from the evening, however I have never seen the show performed in Manchester which is Steinman’s home as well as singers Russell and Jenkins. This alone, I feel made for a more passionate and heartfelt performance.

You can’t fault Steinman in his performance of Meat Loaf’s hits which is as ever, exemplary. His unique relationship with his audience is also something I look forward to, which was even more evident tonight as he chastised an audience member through the medium of sign language whilst performing the opening number Paradise By The Dashboard Light.

I must sadly criticise some members of the audience tonight. On countless occasions many around me in the stalls were talking (in not too quiet voices) during almost every instrumental piece and during Russell’s solo number in act 1. Now I know this is a concert type show, however please show some respect for the performers on stage and those fellow audience members who have paid good money to see the show. I applaud the Opera House staff for removing a particularly loud lady at the interval following audience complaints. Whilst this situation is no fault of those performing on stage, it is an ever increasing situation in venues across the country, and for me it has to stop.

I mentioned Russell’s solo number in act 1. As superb as this was, I wasn’t prepared for her version of Its All Coming Back to Me Now in act 2 which literally brought audience members to their feet. Her voice was stunning (as it was throughout the show) reminding me of a young Bonnie Tyler. If it is possible to upstage Steve Steinman, Miss Russell you did that tonight for me. Incredible!

The music Meat Loaf performed is timeless as this show is proving by celebrating its 25th anniversary and on tonight’s evidence it has got another 25 years in it yet at least. The evening ended (as it did earlier this year at Bat Out of Hell) with the entire audience on their feet rocking out to the most famous song of them all and title of the aforementioned show. This is the closest you’re ever going to get to seeing Meat Loaf performing on stage, so grab the opportunity as the show continues to tour the UK into 2018. http://www.themeatloafstory.com/tour-dates/