The Dancehouse Theatre in Manchester played host to Eight-Freestyle's production of Dick Whittington, and let me tell you, despite the technical faults and a very rushed pace this is still an extremely good panto!

Yes, the directing puts the panto at a rather frenetic pace, with hardly allowing time for the actors to breathe, and certainly not giving as much time to LISTENING and reacting to what the audience are saying as they should. They were sticking to the script and did very little ad libbing in response to audience comments, but am thinking that this is probably due to the fact that most of their routines are underscored by backing tacks and so don't have the luxury of a live band vamping, which is a great pity. This, along with the fact that the mics were set too loud and we got feedback, the lighting in the second act being all over the place, and way too much smoke for the final song and bows, are all minor things in the scheme of it all, and at least the technical problems can easily be rectified before the first proper public performances.

Otherwise, this was really rather good and in amongst the young audience this afternoon was an entire primary school who were laughing, shouting, crying and following this story all the way!

The traditional characterisations of all the main cast were lovely to see, and to watch and hear the young audience's reactions to one of the best King Rats {Adam Urey} I've seen was indeed great! The Fairy {Rebecca McKintyre} was given a bit of a modernisation proving to be able to keep up with street dance! And Sarah the Cook {Matthew Chappell} made his (her) entrance in typical Dame fashion and became more and more entertaining the more he got into his stride. On his first entrance though he seemed very nervous and almost spat his lines out and couldn't keep still even for a second! 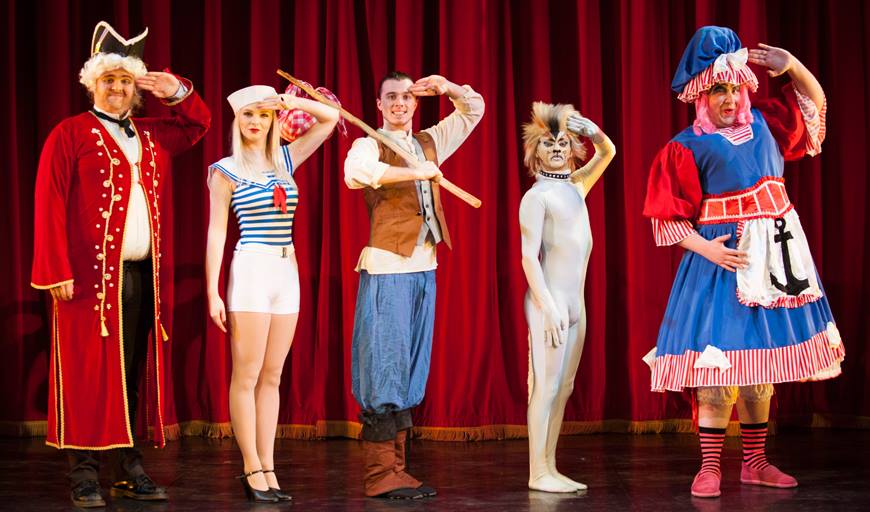 But what stole the show for me was the dancing! Dick's cat looked like it had come straight out of a production of Lloyd-Webber's Cats, and was just as acrobatic too! Played superbly by Shane Hurst. And the rest of the dancing credit goes to The Danceworks in Eccles, which is where I believe majority of the chorus dancers came from. There were many of them, aging I would guess from about 9 -16 years, and in a word, they were fantastic! The choreography {Sean Canning, Moira Hancock, Lauren Townley and Vanessa Murphy-Wood} was spot on. Giving the younger and less experienced dancers fewer and different routines, whilst the middle group did some more advanced dancing leaving the four or so oldest girls to also act as swings for the main characters. The routines were modern, clever and wonderfully executed! Using the smallest girl to mime to "Nothing like a Dame" was pure genius!

The set was simple; just two house flats for the first act [haven’t I seen these before only last week in Giselle??], and a ship's sail for the second. All other scenes were done with projection onto either a plain curtain and were acted in front of the drape, or on a gauze and acted behind which proved really very effective.

Costumes were, in the main, fine, but I do think more could have been made of the Dame's outfits and couldn't all the cast have had silver and gold costumes for the finale?

The script was superb! Certainly the best script so far this season! Jokes and routines for the youngsters, jokes for the adults, the story simply and clearly told, mostly in verse, and all the recognisable and traditional elements of the genre such as the 'yes it is / no it isn't' routine etc all well placed.

The director, Sean Canning, obviously knows and loves the genre and was able to bring out the best from each cast member. The only things I would say are that certain actors need to slow their delivery down a little, and all need to take more time to listen to and respond to the audience's shouting. (If possible). Perhaps I would have liked more than one youngster on the stage for the part which would normally be the "songsheet". In fact, why wasn't there a songsheet? And also, the young boy should have been given a wee present for going up on stage too. I loved the ping-pong routine, and using cast all in black to be invisible was a lovely hat nod to the ancient and noble art of Japanese 'Pantomime' - Kabuki. I really loved that link whether intentional or not.

I would also have preferred a female Dick, that would have been far more in the spirit of traditional panto, but Joseph Gallogly was proficient and adequate.

Finally I would have liked to have seen a proper finale. A big production number for all to sing and dance to, rather than the very half-hearted attempt that was made at the end of the final song. But still, this was one of the best pantomimes of the season, and with very modern street dance routines served on a base of tradition and good humour, there is something for everyone here, and is sure to entertain young and old alike until it closes on January 3rd.