'slams you to your seat, ties you down and demands you listen!'

The 2004 concept album from Green Day is moulded into a stunningly intense visual and gripping punk-rock production that firmly gesticulates to the world in general. Breaking archetypal norms of music we are thrust into rebellion that is active, aggressive, attacking and all consuming.

The music is sensational and the production adds punching impact to the bands social commentary of a world in conflict and a generation of disillusioned youth. The lighting adds to the feel of a rock gig but never distract from the storyline. Directed and choreographed by Racky Plews and designed by Sara Perks this production slams you to your seat, ties you down and demands you listen! The staging is superb with a worn and tired grungy set and the live band made up of Robert Wicks (Keys/Violin), Chris George (Lead Guitar), Nick Kent (Bass) and Charlie Maguire (Drums) assault the senses with the frenzied rage of the original album. 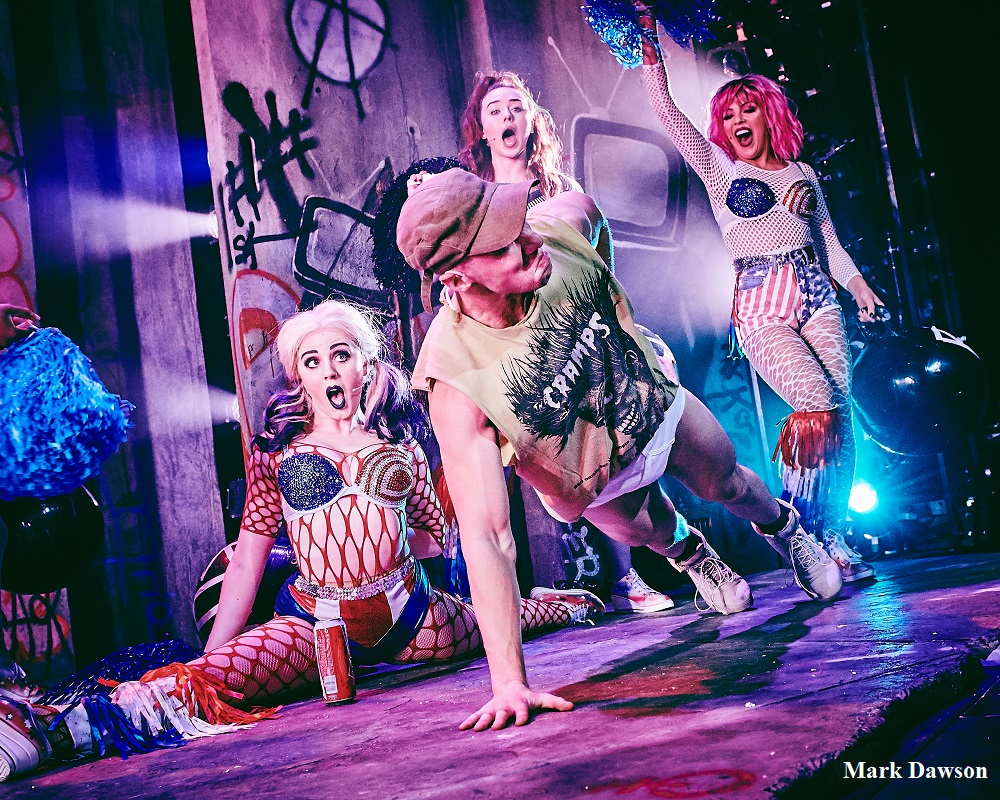 The plot of the story follows 3 disaffected American youths in the wake of 9/11 disaster, Green Day’s punk-rock opera American Idiot explores the disillusion and self destruction of the young, through the stories of friends Johnny played with great realism by Tom Milner, the trapped Will played by Samuel Pope and Tunny played emotionally by Joshua Dowen. As the three young Americans escape from their suburban life, they part ways and for months tread their own very different paths in a world of confusion, conflict, mistrust, disgust and political upheaval. Each of their paths led to consequence, angst, confusion and soul searching. Their journey's shock whilst they violently strive to find their place in a world that infuriates them.

The storyline is not unlike many but it is the nature in which it is told that is the demanding key to this production. Unbalanced in comparison to musicals of equal song and dialogue, the American Idiot soundtrack moulds the libretto to fit between the score. With the pulsating and constant Green Day back catalogue, we witness shocking, harsh, anti-establishmentarianism as the 3 lost young men flounder in ripped clothes, eyeliner, studs and leather. Detesting the Jingletown they originate from and the family and friends they have grown up with, they turn their backs and through the album's central character of Johnny 'The Jesus of Suburbia’ we observe. The lead actor's powerful vocals never disappoint. Luke Friend as St Jimmy, Johnny's demonic alter-ego and Sam Lavery as the seductive Whatsername (both X Factor contestants) are equal vocal matches for the lead characters, both powering the rock. Siobhan O'Driscoll as Heather was another outstanding vocalist as Will's girlfriend who becomes pregnant. The ensemble were as fast paced and aggressive and the whole production shouted out brutality and brashness.

It should be noted that Tom Milner's troubled scenes of drug abuse were difficult to watch but we were compelled to stare straight at the decline and Johnny's distain of the nation. The frustration of the characters is perpetual and felt acutely in today's political climate.

However, all that said the production feels chaotic and at times lacks dynamics as it assaults the audience at break neck pace..... but it cannot be denied that American Idiot is so hard hitting it fascinates with its potent lyrics and visual collage. From the opening to the closing seconds the speed is break neck and full on frantic, aggressive frustration.

American Idiot must be experienced but there is no time to breathe in this explosive production and for Green Day fans it will be bliss!