What would you get if you crossed Shameless and Benidorm and set it in Liverpool?

Desperate Scousewives 2: Pullin a Christmas Cracker, is set in Liverpool on Christmas Eve. Sue and Nessa have just completed their Christmas shoplifting after going to see Trisha’s kids’ school nativity. After Nessa and Sue have had a falling out, Trisha ends up hearing a noise in the derelict house, at the end of the street. It turns out to be Jay, who has come home for the birth of Nessa and his’ baby. Sue and Nessa, having become best friends again, disguise him as Jane, to hide the fact, from Trisha and Lily that he has escaped from prison. With many jokes relating to Jesus, Mary and Joseph, it was also a scouse nativity story of its own!

Written and starring Lynne Fitzgerald as Susan, alongside Charlie Griffiths as Nessa, Lynne Francis as Lily, Sophie Fraser as Trisha and Mark Allen as Jay this is a piece that makes light of the stereotypes of scousers by scousers. 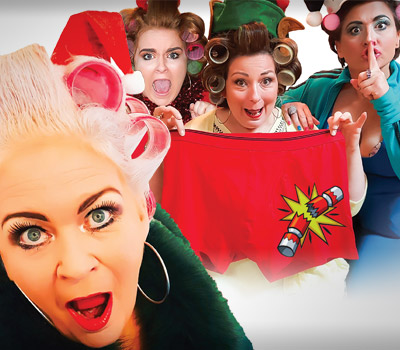 It is almost like a love story to all things Liverpool and keeps the audience highly entertained throughout! Whilst there is some choice language used throughout the play, the tickets do state it’s for over 18s and it seemed fairly obvious that it was to occur, given the backgrounds of the characters. There were moments, when it felt like things were going wrong, for example, a track wasn’t playing for a song, but due to the characters, they were able to take control of the situation and Francis was still able to get a laugh out of it. It didn’t detract at all from the show, and left you wondering whether it was actually scripted that way or not.

For me, one of the funniest moments was when Fitzgerald, Griffiths and Fraser became Scouse Lads. Without saying much, the audience understood the whole conversation and what they were trying to convey. And the majority of the audience had more than likely witnessed a situation similar to this in real life! All five of the cast were able to stay in character throughout, even when some audience members decided it was appropriate to shout out. How they were able to keep their cool and continue with the show was admirable, to say the least!!

I’m not sure how well the show would work outside of Merseyside, whether people took the jokes as they were meant to be taken, or if they’d go over their heads. But it’s safe to say, it was a huge success in New Brighton!