For me the countdown to Christmas officially starts when the Oldham Coliseum Pantomime opens, and tonight the festive season well and truly began with this years’ production of Sleeping Beauty, once again written by Fine Time Fontayne and Kevin Shaw. The Coliseum pantomime has become known as one of the best examples of this fine theatrical tradition in the country and this year once again it does not disappoint.

I must note straight away that there was one person missing from tonight’s show, and indeed the whole run. Fine Time Fontayne has become the first name on the cast list for many a year at this venue, not just as the author of the piece but for his wonderful performances as Dame. Sadly, due to a broken ankle during rehearsals Fontayne was forced to pull out of the show. In the second week of rehearsals, the theatre's chief executive and artistic director Kevin Shaw had to re-draft the script and re-cast the role within 24 hours. Stepping into the tights and wearing the huge wigs this year is Simeon Truby. 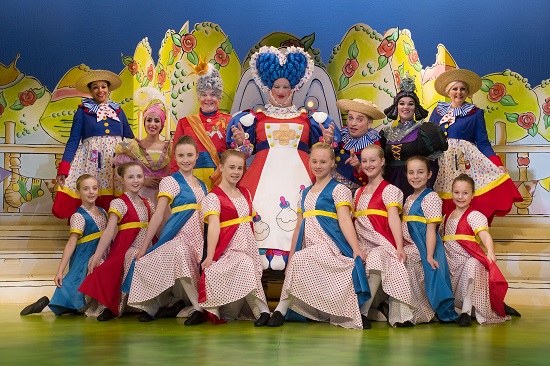 We all know the story of Sleeping Beauty. A Princess is born and immediately a curse is placed upon her by the evil Carabosse that means on her 16th birthday the Princess will prick her finger on a spinning wheel and die. Intervention from The Good Fairy meant that the Princess will in fact sleep for a 100 years before being woken by the kiss of a Prince.

Opening the show, good and evil clash for the first time with The Good Fairy (Sara Sadeghi) and the evil Carabosse (Liz Carney) trading blows before the curtain rises to reveal the Richard J Fletcher uttering his first line “this year I am Norman Nutty! This is relevant as many of the cast have once again returned to this years’ show after appearing in Mother Goose last year, a tradition of Coliseum pantomimes.

Another Coliseum regular Justine Elizabeth Bailey is her usual confident self as she takes on the roles of Nancy Nutty in the first half before becoming Prince Valliant in the second with more than a nod to Toad from The Wind in The Willows. Demi Goodman in her first Coliseum pantomime as Nicky Nutty and later Briar Rose (Sleeping Beauty) is a joy to watch from the first moment she takes to the stage.

David Westbrook as King Cuthbert has one of the harder jobs in this show with a number of tongue twisters and the superb “Oldham Places Song”, mentioning just about every place you can possibly think of in Oldham. The song very nearly trumps last years’ “Tram Song” which was performed by Simeon Truby! Alongside Westbrook is his Queen played by Sadeghi who has the record for the most costume changes in the show. 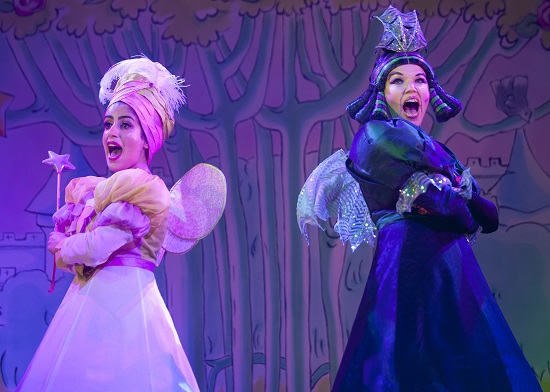 Simeon Truby as Nanny Nutty was perfect from start to finish. Despite stepping in at the last minute he looked quite at home in a myriad of stunning costumes which seem to get more breath taking year on year.

This year the pantomime is a musical feast with songs peppered throughout the night all performed live alongside the magnificent 3-piece band under the direction of Dave Bintley. There is a West End feel with songs from Matilda and a fantastic version of “Loathing” from Wicked performed by Carney and Sadeghi.

What Pantomime wouldn’t be complete without its chorus of local youngsters. Tonight, we had the red team performing and all executed the choreography from Beverley Edmunds without fault which was nice to see as this was their first performance of this years’ show. I do note however in all 3 chorus groups performing in rotation for the 84 shows there are no boys whatsoever. Personally, this is sad for me to see.

As ever the set was stunning and traditional. Designed by Celia Perkins it threw up a few surprises during the night including decorating itself for Christmas and providing a home for a frog. Also there was a Christmas tree with a mind of its own that seemed to be funnier for the adults in the audience than the children, this takes the double entendre element of panto to a new level!

All the elements of a good old fashioned pantomime are on show here in Oldham. There is a song sheet (of course), a ghost scaring off the cast, a UV scene (superbly executed) and of course the annual Rochdale jokes.