The Manchester Academy Of Fine Arts was founded in 1859 in the building which is now Manchester Art Gallery, the organisation currently has a membership of over 100 painters and sculptors representing the very best in the region. The Academy has an illustrious progeny, its members having designed both The Town Hall and The University, and L.S. Lowry was once a student.

Their current exhibition, being held in the beautiful and serene Portico Library, built in 1806 with still many features of the library untouched since that time.

The exhibition itself comprises over 100 individual artworks, with five sculptures, and are beautifully displayed between the library bookshelves around the outer walls and the cafe in the centre. 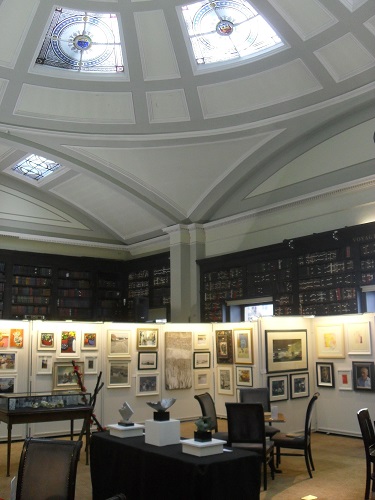 The pieces on exhibition show a rather eclectic mix of painting materials (oil / watercolour / pencil etc) with acrylics and mixed media prints; contrasting styles and influences, and with artists ranging from those who have already established an international reputation to those just staring out.

All the works on display are also for sale with prices ranging from £70 for the smaller items to the whopping £3600 for Norman Long's 'Heading Home'.

Many of the pieces on display have a very familiar feel to them as they are scenes of Manchester's surrounds such as John McCombs' 'Outdoor Tables, Delph', or Sheila Dewsbury's oil, 'Hillside, Greenfield'; or indeed of the city itself, as with Janis Bowie's, 'Fruit And Veg Stall, Arndale Market' and David Edwards' interesting oil, ' A Wet Wednesday, St. Anne's Square'.

Other artists take you further afield, even into the realms of imagination and dreams. However, I did like a lovely little oil of the 'Mooring Posts' of Venice by Lawrie Williamson.

For me though, there were 4 stand-out pieces. The first is a mixed media piece which, from a distance looks like a blank white canvas, but the close you go, the more detail you see, and it is this attention to detail which is so attention-grabbing. That, and the stark reality that being out in winter can actually make you 'snow-blind' where everything does seem white. It is 'Prague's Snow Blanket' by Bridget Collins. The other three are actually quite similar in the fact that they are all portraits, but are very different in their individual styles and approach to the subject. 'The Dress Rehearsal' is a beautiful retro study of a young boy by Louisa Giovanelli; Kath Lowe's 'Peter' is in black and white and is as clear and as crisp as a photograph, showing every wrinkle but simply stark and beautiful. My overall favourite piece though was a truly amazing portrait of a girl which wouldn't look out of place in an exhibition entitled The Pre-Raphaelite Idea Of Beauty. I talk of course about Bohuslav Barlow's, 'Angel'.

It is a lovely exhibition, which is open until the 30th April, and is an ideal escape from the hurly-burly and speed of Manchester life. The Portico Library offers a quiet and relaxed friendly atmosphere in which to view these works, and you can even do this whilst enjoying a cup of tea and a scone. 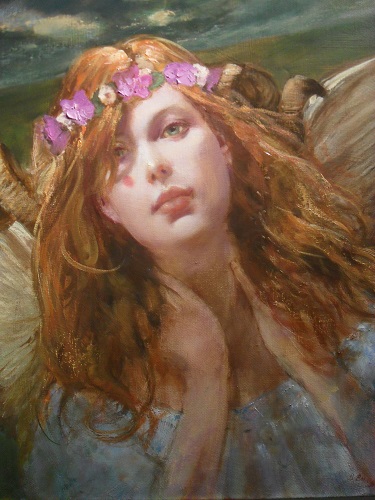