On a fairly sparse stage, with only a piano and guitar for decoration, three very ordinary and unassuming figures shuffle onto the stage without any applause before earnestly introducing themselves. It may as well be the preamble to a pub open mic night. But, when these three performers begin to sing, the atmosphere of the entire auditorium changes for the course of the night and the audience are evidently hooked. The Ballad of Johnny Longstaff is everything good storytelling should be and The Young’uns (Sean Cooney, David Eagle and Michael Hughes) deliver it perfectly.

The Spanish Civil war in the modern consciousness has the habit of being rendered context fodder. Out shadowed by the rise of Hitler and Mussolini, it’s either known as the background behind Picasso’s Guernica or mentioned in dispatches as the fruitless fate of misguided bright young who reluctantly retreated or gave their lives on the battlefield. Indeed, Johnny Longstaff was one such bright young thing, but instead this seemingly kamikaze-like journey to the Pyrenes is rationalised in the testimony of one man who dreamt of a better tomorrow for all humanity after an early life living in hunger. 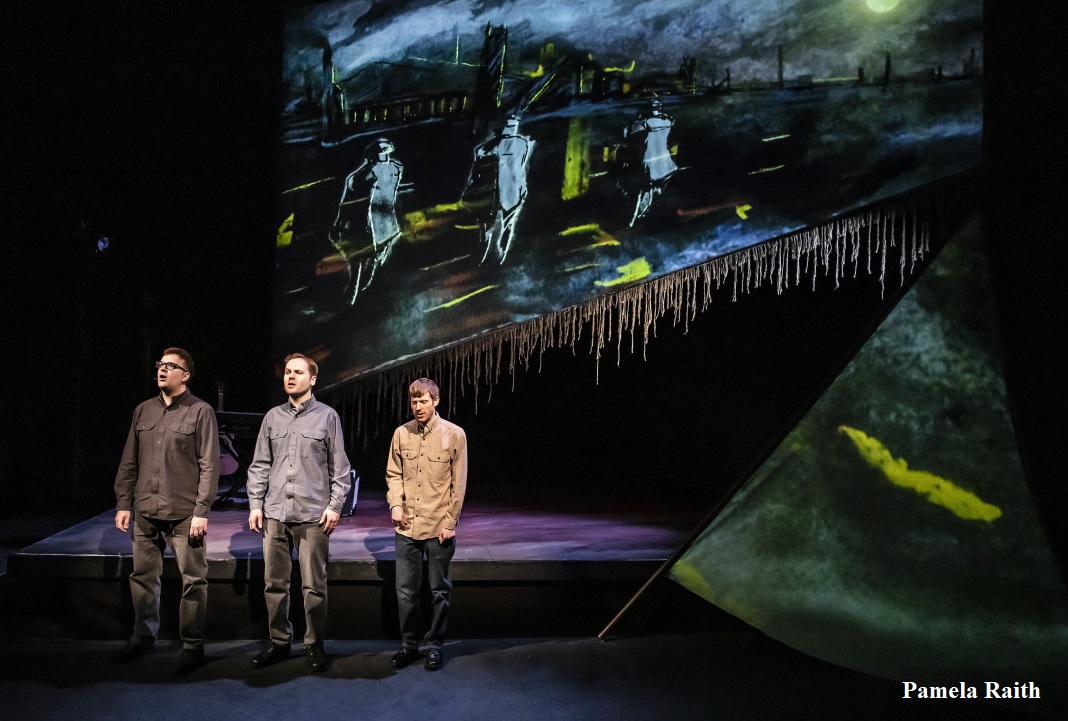 Centred around the Imperial War Museum’s recordings of Johnny’s testimony, ‘Ballad…’ began life as a concept album by award winning folk trio, The Young’uns. Approached by Longstaff’s son, Duncan, after one of their concerts, they chanced upon the life of someone who was caught in some of the most important moments of the early twentieth century. The Young’uns began to re-tell his story in a vernacular true to both his and their Stockton-on-Tees routes, immortalising his tale through folk-singing odyssey befitting a true hero of a true working-class hero.

The concept of knitting his cultural heritage with his remarkable story is consummately crafted. There are re-writings popular folk songs with stories of life, from ditties to ballads, and even republican songs from Spain, all in the tightest most stirring three-part harmony arrangements. Story arc and concept aside, the music is soul warming and sublime.

Johnny’s story is awe-inspiring. Encountering the Hunger Marches and the Trespass Movement, Johnny marched from Stockton-on-Tees to London, meeting refugees from Fascist Italy and Nazi Germany, before leaving to fight in the Spanish Resistance, and finally serving in WWII. ‘Ballad…’ is a refreshing and timely reminder of Britain’s working-class resistance to the far right. And, the emphasis really is on hearing the story and enjoying the words crafted so thoroughly. Despite the theatrical nature of the production, Johnny isn’t played or represented by any of the musicians. More touchingly, he floats through the auditorium like a spirit through the testimony recordings. By the end, his presence in the theatre is so strong we can almost sense Longstaff sat on stage with The Young’uns. How strange it feels, at the end of the production to be in the presence of a heroic everyman that we didn’t even know the existence of until two hours ago.

Partnering with Lorne Cambpell’s subtle direction, Kai Fischer, Scott Turnbull and Aaron Brady’s design, lighting and animation incorporate the great visual movements of the day, from Dynamic Suprematism, Primitivism, Surrealism, Dadaism and Nationalism. They join forces together, recreating the imagery of fragmented memories in the sweeping expanses of Spanish mountains and portraits of Longstaff’s comrades. Alone, these visuals are as captivating as the songs of Johnny’s life.

‘Ballad…’ isn’t theatrical, showstopping, or exuberant. Lacking these qualities is its main strength. It’s beautifully and genuinely human. Not only does it demonstrate man’s compassion for fellow man, but memorialises resistance towards Fascism in the early days of the twentieth century from beyond the corridors of Power in Whitehall, in the working-class towns of the North of England. As the right rises and countries begin to look in only on themselves, Longstaff’s message needs to be heard loud and clear.

‘One day there’ll be no us and no them… the sins of our fathers will never harm our sons’. https://www.traverse.co.uk/whats-on/event/the-ballad-of-johnny-longstaff