Babes In The Wood - Versions I and II - The Garrick Playhouse, Altrincham

Pantomime! In March?! I hear you cry..... well, stranger things have been known to happen and as part of The Garrick Academy of Performing Arts' (GAPA) productions this week, the youngest groups tackled the traditional story of Robin Hood and the Babes In The Wood.

There were two different productions today, both utilising the same set and script, and so the vast majority of the two pantos was very similar, which is why I am combining the two. In the afternoon it was the turn of the 8 - 11 year olds (with two appearances from the youngest of all the groups, the 5 - 8 year olds); whilst the evening was give over to the 12 - 16 age group.

My first consideration here is that children know and love pantomime as audience members; but would they be able to perform larger than life stock caricatures and work an audience, ad-libbing and joking along the way, occasionally slipping deliberately out of character, and generally hamming this traditional artform up for all it's worth? I have to admit to being pleasantly surprised by just exactly how good majority were at this. Energy levels were high for both shows and it was obvious that all involved were having a great time; which for panto, is exactly as it should be! 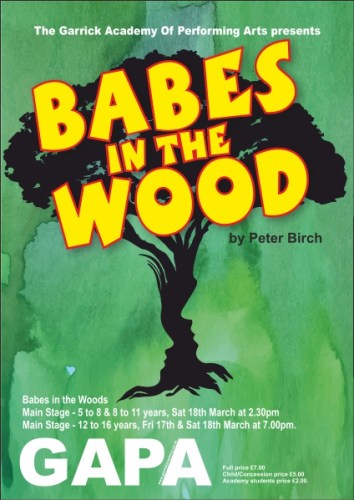 Both had rather large casts, naturally, since all the children had to be involved, and so crediting all, or writing about all would be impossible! What I shall do in this case is simply say a huge congratulations to everyone, and simply credit here a couple from each group who for me, managed to impress and shine a little more than the others.

In the afternoon groups, then it was Charlie Hill's Dame Dolly Dumpling, Georgia Taylor's wonderful stage presence as Little John, and the witch trio of Morgana ( Eve Joseph ), Ditto ( Ella Weipers ) and Echo ( Emma Conway ). It was such a shame that they were having many technical problems, and much of the dialogue was lost. Absolutely not the actors' fault and they kept going regardless, but Hill, having by far the most lines in the show, showed a maturity way beyond his tender years in coping with all of this and his dame characterisation never once faltered.

In the evening show, then I would like to make special mention to Tea Milanovic (The Sheriff of Nottingham), Jess McCann (Dame Dolly Dumpling) and Alice Poole (Will Scarlett). I also very much enjoyed Lotties Warburton's thigh-slapping and hands-on-hips traditional portrayal of Robin Hood, and Issie Turner's (Maid Marion) lovely singing.

I also really need to mention the great idea in the second panto of having the Sheriff's Guards dressed in black with sunglasses. A nice touch!

For my money, both shows were just a tad long, running at 2 and a half hours each (including interval). Asking children so young to commit to such a task was a big ask. - especially the two actors tackling the role of the Dame, who never seemed to either shut up or be off stage! But everyone rose to this challenge superbly, and the singing and dancing (I especially liked the choreographic ideas of the second show) as well as the acting impressed and despite both shows only garnering half-full houses, the applause at the end of both more than made up for this!