Despite attending theatre productions for the last 30 odd years I am embarrassed to say up until tonight I had never seen Little Shop of Horrors. A shocking admission I know but on reflection it was nice walking into a theatre with no pre conceptions, or anything to compare what I was about to see with. And I spent the whole time driving home asking myself how this musical has passed me by for so long.

On the face of it this is a simple show for amateurs to perform with only 7 people on stage. However when you add the complexity of not only a plant that has to grow during the show, it is also required to sing and consume human beings things can get a little tricky. PAP Productions have embraced all these challenges with style and produced a beautiful show to both look at and listen to.

So if you’ve never seen Little Shop before like myself, the story. Meek flower shop assistant Seymour (Nick Ward) pines for co-worker Audrey (Hannah Davenport). During a total eclipse, he discovers an unusual plant he names Audrey II, which feeds only on human flesh and blood. The growing plant attracts a great deal of business for the previously struggling store. After Seymour feeds Audrey's boyfriend, Orin (Luke Grimshaw), to the plant after Orin's accidental death, he must come up with more bodies for the increasingly bloodthirsty plant.

PAP have gathered one of the strongest casts I have seen in a long time led by Ward and Davenport. Both have an amazing stage presence and work so well together. Their vocals also are note perfect throughout and their comedic timing razor sharp.

Grimshaw as Orin puts in the performance of the night as the deranged boyfriend of Audrey. The scene leading up to the interval in the dentist surgery with Ward was ridiculously well done, and you could see the visible fear on the audience faces as Grimshaw leapt into the audience and roamed around the stalls.

Narrative and backing vocals comes from three street urchins Ronette (Bethany Heywood), Crystal (Emma Ramsden) and Chiffon (Nickie Simms). All three harmonise stunningly together as they pop up at various intervals to help the story progress. Whilst it is hard to single one out as better than the other, I have to say Heywood's riffs were something else altogether.

John Redfern and Paul Wilson have designed a great practical set which moves to create various scenes. Redfern is also responsible for the sound which in all honesty was a little loud on opening night, the excellent live band led by Paul Lawton drowning out the cast vocals slightly on some of the rockier numbers. Amy Walker provides choreography albeit slightly limited in quantity on this production due to its nature.

Director Paul Wilson has ensured that Little Shop of Horrors is a fun musical with a stunning cast and in the hands of the PAP Productions team guaranteed to be a sure fire hit.

The show plays until Saturday at Hyde Festival Theatre and tickets can be found at https://www.ticketsource.co.uk/pap 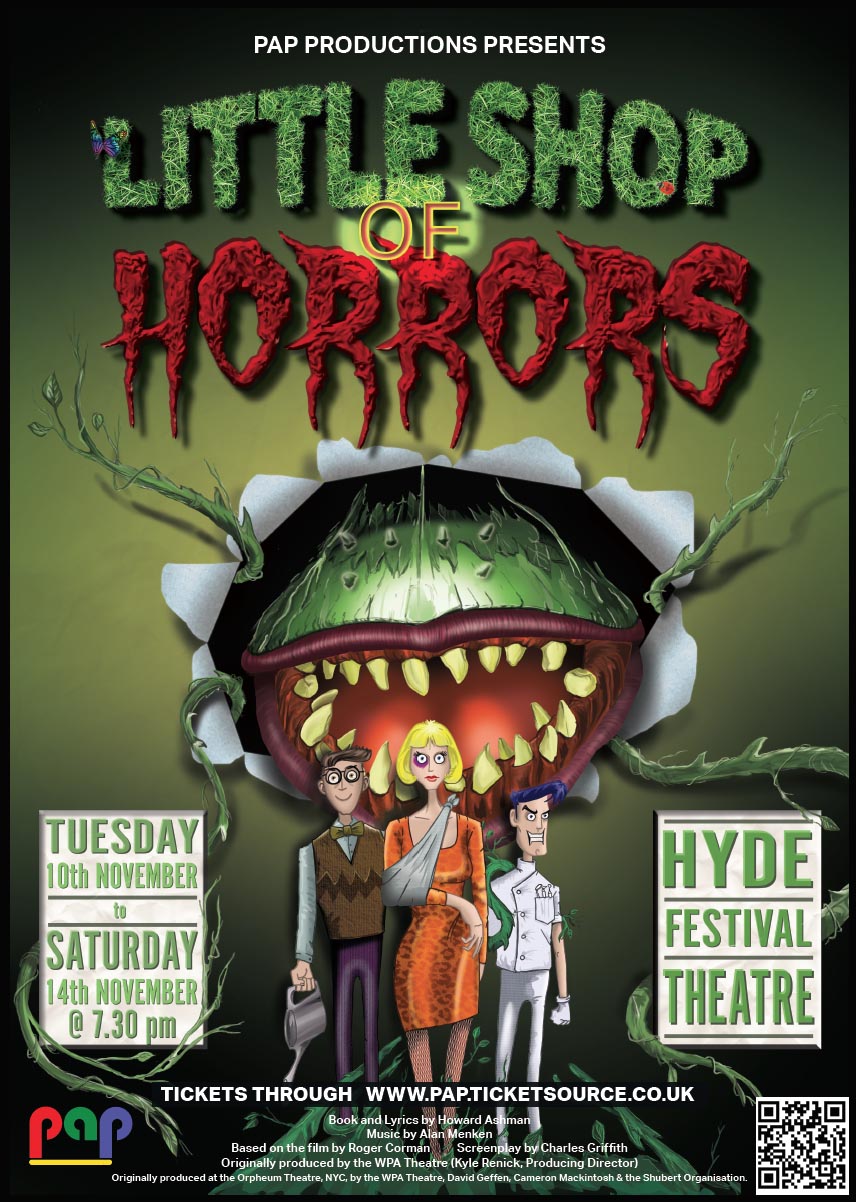