Once again Artistic Director David Thacker has brought another stunning production to the Oldham Coliseum stage.  Hindle Walks is a simple comedy using a sparse set with subtle lighting allowing the cast to shine centre stage.

In 2015 the plot seems farcical; virtually nobody today would bat an eyelid to a young couple sneaking off to a seaside resort for a weekend of illicit fun.   But in 1912 when this play was first staged views were very different indeed.  Hindle Wakes tackles these views sensitively with a good few laughs along the way.

Set during Wakes week in a fictional Lancashire town Fanny (Natasha Davidson) returns home from a supposed trip to Blackpool with her friend Mary.  Following events earlier that day Fanny is unaware of, her story of deceit unfolds before her eyes much to the disgust of her parents played by Kathy Jamieson and Russell Richardson.

Following a visit to the parents of Alan (Tristan Brooke), the suitor in this story a suggestion is made that the pair marry.  Cue discussions of money, reputation and Alan’s fiancée Beatrice (Sarah Vezmar) things become somewhat complicated.  In the final scenes when both families meet complete with the courting couple and a more than unhappy Beatrice events don’t quite turn out as the parents plan with Fanny finally standing up for her own rights.

Barbara Drennan and James Quinn play perfectly off each other as Alan’s parents all the time never straying from the thick Lancashire accents.  Colin Connor as Sir Timothy Farrar provides some of the best moments of the play whilst drinking copious amounts of whiskey.  Fleeting appearances from Anna Wheatley as Ada, the maid complete the cast.

The set designed by Ruari Murchison is very basic yet effective successfully depicting the class divide between the two families.  Clever lighting by Richard G Jones provides two complete different atmospheres between the two versions of the same set.

The show caused great controversy across the country following its first opening at the Gaiety Theatre in Manchester in 1912. Many newspaper correspondents questioned whether its treatment of non-marital sex would set a bad example for young women.  In Oxford professors banned students from visiting theatres where the play was being performed.

Hindle Wakes may have lost a lot of its shock factor over the years as attitudes change, but one thing it will not lose is its simple humour and cleverly written script.  Providing another jewel in Oldham Coliseum’s crown. 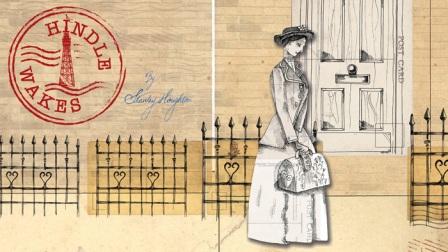