Being the creative director of the Theatre Royal Wakefield it is only natural that John Godber is teaming up with Theatre Royal to bring us one of his most celebrated plays, Bouncers. Performed in a multi-role style by four actors, the play does not have a specific storyline but is broken up into tableaus giving us a vision into a typical night on the town for four Bouncers working the club, four girls and four lads. Though written in 1977 this play gives us a witty, humorous and at times very cynical insight into modern nightlife that is just as relevant today as it was when it was written.

We are introduced to the play with a rap, detailing the overall message. However I found that it took the actors a little while to get into the performance, and one of the actors didn’t take part at all, which took away some of the effect, though when they finally got into the rap it was highly entertaining. The scenery was very sparse and the only props available to the actors were four beer casks and four glittery handbags. 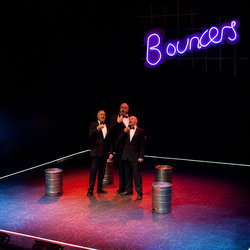 This was a blessing in a way as the actors were more than capable of illustrating changes in character through their physicality and tone of voice, meaning that the constantly changing scenes were relatively easy to follow. The lack of props and staging also meant that scene transitions were much smoother and the entire focus of the audience was on the four actors.

Immediately Rob Hudson, who was portraying Lucky Eric, Stood out to me. He completely embraced the character of Eric, and he really created a light hearted sense of comradery with his fellow bouncers’ which was dramatically undercut with dark undertones during his monologues, perfectly embodying the contradictory nature of his character. He also showed real strength of character and was easily distinguishable as the leader of the pack. Zach Lee also stood out particularly when in the character of ‘Sexy Suzie’. The rest of the actors were very awkward and stilted when in their female roles, which did not take away from the play but merely added another comical element, however Lee fully embraced his female role and gave a very sultry and intense performance. Adrien Hood was also perfectly cast as the dumpy and unattractive Elaine and the blockhead bouncer Judd. He cut an intimidating figure as both of the characters and portraying Judd he was the perfect catalyst for lucky Eric, illustrating Eric’s darker side and leading into his powerful monologues. Lastly but not least we have Frazer Hammill whose seamless changes between characters were simply breath taking to see and each character was easy to distinguish in their own right despite a lack of costume change or props.

Overall despite the odd hiccups I thoroughly enjoyed the show and laughed so hard from start to finish, as did the rest of the audience in the packed out theatre. Yet at the same time I was left thinking about the darker meaning of the play, a trait you will find in most written by Godber. I would definitely recommend seeing this performance.