Written and directed by Naomi Summer, this play, despite its title and theme of marriage and (homo) sexuality isn't about that at all; it's about religion, and more specifically Christianity.

"...at the end of the day the church pays your wages. You have a responsibility."

There are certain churches, groups of Christians who are rather overzealous in their literal interpretations of the text. And just as the media at the moment is all too keen to seize the opportunity to highlight extremism in other faiths, especially Muslim, we are either unaware or choose to ignore, blatant Christian bigotry and extremism on our own doorsteps.

This play attempts and succeeds in showing how religious dogmas and misguided ideologies can torture and misrepresent making peoples' lives miserable and unfulfilled.

"The church is a family, and you can't turn your back on family."

The play tells of three couples and how their lives are totally controlled by the FEAR of religion. The pivotal couple being the pastor of the church, Caleb, and his wife, Leah, played by Seth Daniels and Rachel Creamer. Caleb has a sister who is lesbian and is living with the girl she intends to marry, much to Caleb and Leah's total disgust and disapproval. This leaves Caleb torn between his love for his sister and his love, fear and belief in God; and leaves his sister, Esther, finding that she too has to make choices that she should not be having to make; choose marriage and excommunication from both your brother and your church, or choose to continue living in the fear of God and the adulation of your brother, but unhappiness not being able to live the rest of your life with the person who means the world to you. Esther was played by Victoria Tunnah and her lover, Natalie, by Fiona Organ. To add further weight to the already heavy anti-Christian message the play was purporting, then there was a further couple, beloved by the church because they chose heterosexual marriage and to be welcomed into the fold to work as ministers to God. Dan (Barney Cooper) and Hannah (Lucy Hird). Things go wrong here too. On the evening before Barney's departure to a religious seminar 'Bethel', Hannah entices him against his own staunch beliefs to make love to her. This is something which haunts and tortures him whilst at the seminar, and whilst there tries to kiss and befriend an old flame. News of this gets back to both his fiancée and the pastor. Hannah's religious beliefs state that the 'contract' in the bed is a signed contract of marriage, and then to even try to kiss another is to commit adultery. She therefore refuses to go through with the marriage and leaves Dan's religious ministering career in ruins.

"Marriage is not about sex and you know that!" 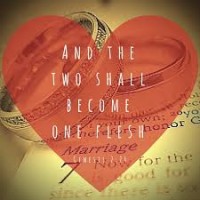 To come back to the pastor and his sister; then after torturing himself over what is ethical and acceptable for a man in his position to do; he finally decides to do the right thing and go to her wedding and give them his blessing. His wife however, still unable to do so.

There is really nothing in the play which is new, and hasn't been the subject matter of drama before. Also, the second act didn't tell us anything new about the characters that we didn't either know or couldn't glean from the first act. Further the ending was more than predictable. However, there were some excellent and rather ironic lines in the play, and a good balance between tub-thumping the themes and gentleness. The cast were all very strong performers who worked well together to produce this thought-provoking drama. I especially liked Tunnah's performance. Her role as the agonised sister of a religious zealot living in the shadow of her father, yet not being able to deny her sexuality or her love was heart-wrenching and totally believable. I also liked the chemistry between the third couple, Dan and Hannah. They seemed by far and away the most real couple of the three, and I could empathise with Dan whilst understanding Hannah's perspective. Daniels's performance as Caleb was sincere and well placed, however his ever nasty bitch of a wife, Leah, was rather one-dimensional. I actually don't really think this though was her fault. The writing and directing gave her nowhere else to go. Similarly with Organ's character, Natalie; she was only given one emotion which she had to play variations of throughout.

The play could have stood up to be counted and really been a provoking and challenging piece of theatre. But instead it chose to choose a controversial theme and then play it as mainstream. I think that was a mistake. The play ends with Caleb and Dan playing instruments and singing joyously whilst Esther in white wedding dress marries Natalie and all is tied up in a lovely cute ribbon so we can all leave the theatre smiling and happy!