I purposely did not read any reviews before visiting this show; I was hoping to see a fantastic story through song on the Fab 4 rising to stardom but I was sadly to be mistaken.

There is no story line at all just 4 singers singing their way through as many Beatles tracks they could fit in.

The fab 4 consisted of: Paul – Emanuele Angeletti a singer in the Beatles tribute band The Apple Pies. In 2005 he was in the most successful Italian Beatles tribute band and was invited to record in Abbey Road’s Studio 2, the same studio in which the Beatles recorded many of their albums. In 2012 Emanuele opened ‘Let it be’ at the Prince of Wales Theatre and has since been involved in many tours, including Singapore and Europe.

John – Rueven Gershon has also been involved in ‘Let it Be’ since it first opened in 2012. He stayed with the show through its transfer to The Savoy Theatre and performed with it during its stint at the St James Theatre in New York. Other trips abroad with the show followed in Canada, The US, Singapore and Amsterdam.

George – Paul Mannion a true Liverpool lad studied music theory at Liverpool Community College. This talented musician has done many things in the theatre including composing his own music for films and theatre productions and is currently working on an album of his own material.

Ringo – Stuart Wilkinson has been a professional musician for over fifteen years and started playing drums and guitar at the age of sixteen. In 2014, Stuart played the drums and tuned percussion for the Channel 4 'Snowman and The Snow Dog’ .Currently Stuart plays lead guitar in Ricky Gervais’ band Forgone Conclusion and has just finished recording the soundtrack and filming his role in the upcoming feature film ‘Life on the Road’ due out in August 2016. 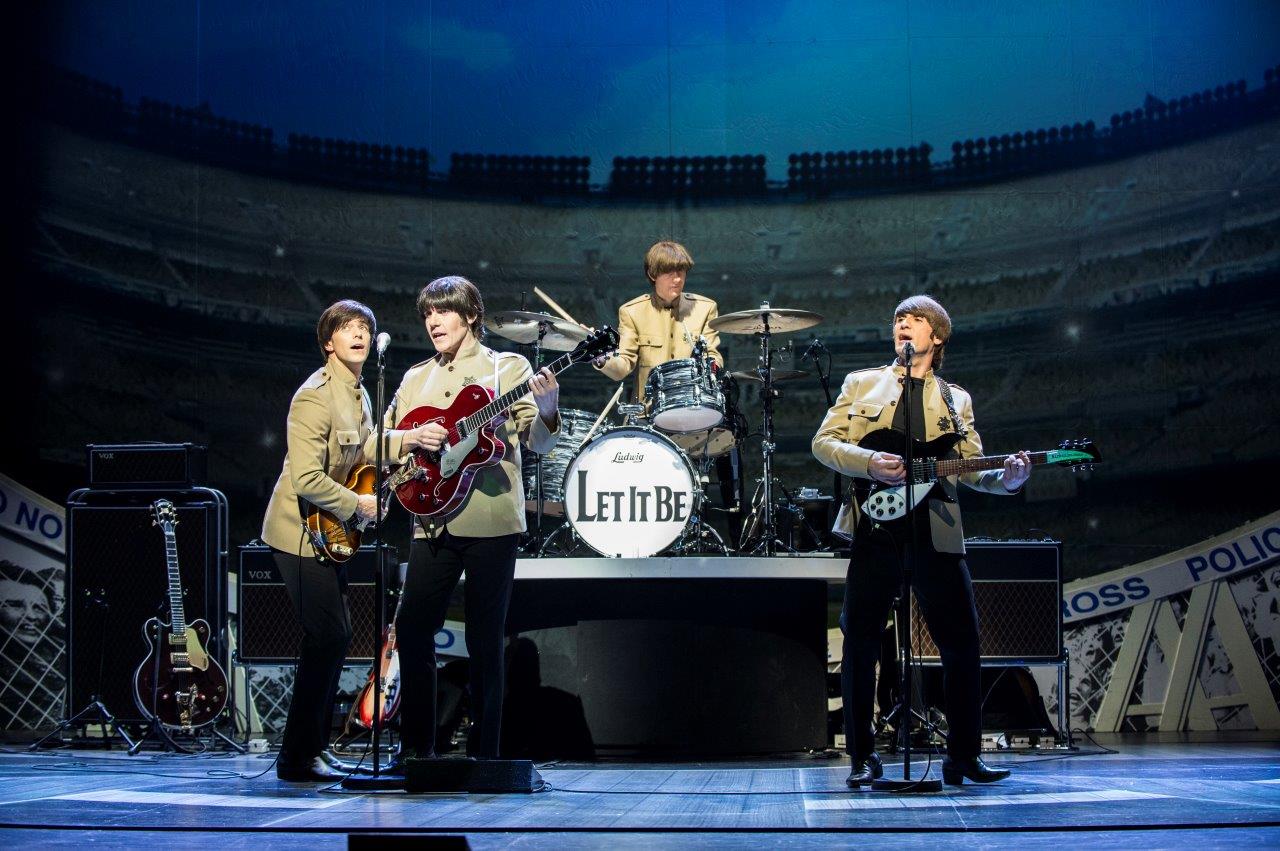 The performance started ten minutes late but the auditorium was a full with a mixed audience of young and old but all hungry Beatles fan ready for a bit of Beatlemania. The audience were actively encouraged to participate, take photos and film and of course the obligatory cheering and screaming.

The stage initially was a recreation of the Cavern as the fab 4 started their journey through the many Beatles songs. Above the stage hung two retro TV screen and an old fashioned radio in the middle which were used throughout the evening to enhance the visual effects of the performance. The opening number was to everyone’s delight as the audience began to sing and clap as loud as they could.

They swiftly moved on to The Royal Variety Performance singing ‘She Loves You’ and ‘I Want to Hold Your Hand’. Followed by the fab 4’s move to America and New York where they had become a top pop musical phenomenon singing ‘A Hard Day’s Night’, Can’t Buy Me Love’ and ‘Yesterday’-“a B side for an A side wrote at the seaside”.

Moving on to Wembley, the graphic where excellent in this scene as they recreated Wembley Stadium and cleverly used the TV screens above the stage to mix original footage of the crowd with the modern day singer’s. They belted out ‘Help’ ‘I Feel Fine’ followed by the fab 4 getting everyone on their feet to ‘Twist and Shout’ sending the hungry Beatle Fan’s into a frenzy.

During the performance however it became apparent that it was not everyone’s cup of tea and a few of the audience left throughout the first half. There were also some technical issues as the centre stage graphic became very blurry and out of focus making it a little disorientating.

1966 saw the fab 4 in the studio developing their alter ego’s during the drug induced psychedelic 1960’s era, the scenery and costumes were bright , dazzling and classic of the fab 4 as they sang ‘Sgt Pepper’, ‘Eleanor Rigby’, ‘Lucy in The Sky with Diamonds’ and ‘When I’m 64’ with great visual effects of a 64 dialled clock, the lighting was fabulous and made the audience feel like they were actually at a concert and not at all at The Opera House Theatre on Quay Street.

By the second half we were in ‘the Magical Mystery Tour’ of 1967 where the instruments changed to more modern ones, singing ‘Strawberry Field’s’ , ‘Blackbird’, ‘Here Comes the Sun’ and the infamous ‘Yellow Submarine rounded the era up to a sadder note of the Vietnam War as the shown original footage of Hiroshima and Vietnam.

The hippy era was here and the fab 4 dressed for the occasion with visuals of’ flower power’, festivals and Neil Armstrong walking on the moon.  The evening was rounded up with a medley of songs and of course the final song had to be ‘Let it Be’.

A great night for Beatle fans but if you think there is a story you will be sadly disappointed it is tribute band singing their way through chronologically the fab 4’s rise to fame.  If you are a Beatle fan then it’s a must see as it really is a celebration of their music but if you are a theatre goer wanting a story then this is not the show for you.

The show runs until March 5th and tickets are still available at http://www.atgtickets.com/shows/let-it-be-2016/opera-house-manchester/