Thaddeus Philips is a magician. In the space of 75 minutes, under his wing, I visited Italy, Croatia, Brazil, and Mexico, amongst other countries. The level of visual story-telling achieved through a chair, a table, a lamp, a microphone, and a mug was incredible, although the skill with lighting was truly a wonderful thing to behold. A metal bar hung from the ceiling, raised or lowered as necessary, covered in various torches and neon coloured lights. The bar became, at various points, a Communist train carriage, the infamous Amsterdam Red Light District, several different waiting rooms in airports, border patrol floodlights, and car headlights. Visually, it was stunning.

The one-act play opens with a brief history of the passport, one which reminds us of the superficial and constructed nature of countries and borders. 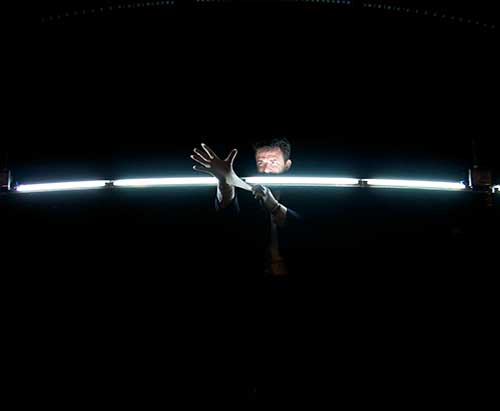 This is then explored in more depth, using stories to question why passports, visas, and general rites of passage are so easy for the few and impossible for many.

The performance itself tackled key issues very pertinent to the current talking points around the refugee crisis and Donald Trump’s recent comments on immigration. Humorous anecdotes of one man’s journey around the world are undercut with very tragic stories of those who were denied access to the free roaming the narrator seems to be granted so freely due to his American passport.

Snippets of other lives, of young girls in tiny boats trying to cross the Mediterranean and of men hiding in the undercarriages of planes bring a darker edge, reminding us that travel stories don’t always revolve around the privileged trying to find some foreign culture.

It is clear to see why this performance has already received considerable success – it is an utterly compelling piece of story-telling. I simply cannot fault it.