Excited at the prospect of watching a murderous drama, we walked into the warm and welcoming Floral Pavilion with open minds. Ready to be taken on a thrilling journey of kidnap, suspense and drama we took our seats and settled in for the ride.

The first thing that struck me was the back drop. So clear was it, that at first I didn’t actually notice that it was just a projection and felt immediately that we were at the train station with the two initial characters. The sound effects which accompanied were very familiar and it allowed for a solid opening to the play.

As we were taken from scene to scene the actors were very fluid in their transitioning and the classical music that played throughout scene changes was very fitting and helped move things along seamlessly.

Individual performances were executed well and my personal favourites were from Dean Smith who played Joe, Paul Opacic who played Paul and Rachael Hart who played Tillie. Smith was the one the audience warmed to the most, he was the only one I felt a genuine emotion towards and this is a credit to his craft. 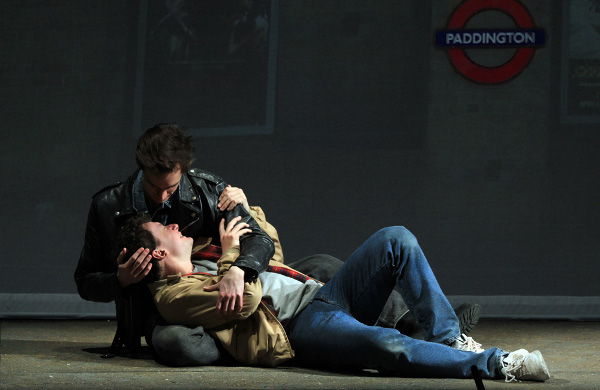 Opacic showed versatility in his role where others struggled a little. He wasn’t stuck in one particular ‘mode’ and felt his character was able to express multiple sides of his personality at various parts of the play. Hart was the person you hoped to see back on stage whenever she was off. The life and energy she portrayed was often the driving force of a scene and without her I think we might have got bored at times.

The set and its effects were pleasing and I especially enjoyed the split stage set up. It was a clever way of showing both the outside and inside at the same time, through lighting, projection and visibility.

The most effective scene of the evening came mid-way through act two and involved the telephone calls from the characters at the phone box to Opacic’s character. You felt yourself becoming engrossed in their antics and this was when the pace finally seemed to pick up from an otherwise slow moving play. Unfortunately the play as a whole had struggled to get going. There was a strong enough plot being played out, but the oomph behind it was just not there. It was as if you could see what they were trying to do, but they didn’t fully get to doing it. Therefore, I wouldn’t say this piece of theatre was bad, but nor would I celebrate it. The type of programme that if it was on the TV you might have it on the background, whilst you busied yourself with other things.

I personally like to gage the atmosphere of the audience at the interval and ending of a play. Most often you feel a collective buzz from people in between acts or upon leaving the theatre but sadly I didn’t get a sense of that at either point.

Overall, An interesting story, but perhaps one that didn’t quite suit the stage.