Women are already the minority in the comedy scene, and although there are fierce female comedians who are creating fresh material, many women in comedy seem to rely on tropes and clichés to get laughs. Unfortunately My Funny Bits is no different. Written by Andrew Ludlam, our five characters are successfully distinctive thanks to Tami Stone’s skill in posture and characterisation, but the stories they tell are tired and their motivations one dimensional. 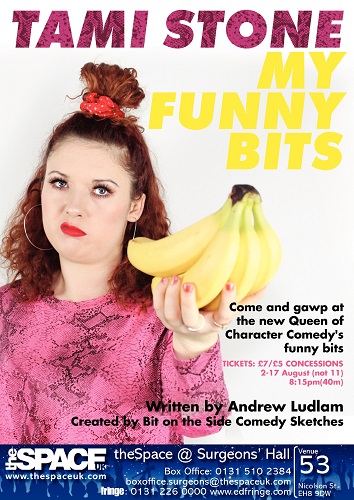 We first meet a woman who is in an interview for a poorly-described performance role. As she gushes about her past work including playing the dead stripper, the hooker-cum-detective (or was it detective-cum-hooker) it is clear this character has been typecast throughout her performance history. She is obnoxiously loud and in your face, which is paired with a distinct unfamiliarity with the finer points of the English language. Stone stays in this character well, but the laughs are few and far between.

Our next character had hopes of stardom as a rapper and was voted off a reality television show with record low numbers. The front woman of Kandi Lace is a south Londoner with a strong accent and again, a poor grasp of ‘big’ words. Throw away lines about previous band members being slags are bandied about amongst talks of new recording and writing, doing nothing at all for the battle against victim blaming and slut shaming. We meet a crazy cat lady on her umpteenth speed dating venture, which again, falls flat for her. This character attaches herself to the man of the minute, screeching as he leaves before batting her eyes at the next to sit across from her. This overreaction is nothing more than a damaging portrayal of a ‘mental ex-girlfriend’ type.

My Funny Bits is lacking any solid narrative in any of the characters, and the laughs just aren’t fast paced enough to keep interest. Although Stone should be recognised for her characterisation, the constant portrayal of the shallow, bimbo woman is tiring at best and frustrating at its worst. It seems that male writer Ludlam has relied on these overused female tropes to gain laughs but what has emerged is a near-offensive depiction of idiotic women who are looking for shallow gratification. Without a lived female experience, I can’t imagine how these characters could have come across authentically.