You’ll be moved and charmed by this pathos packed gem that uses gentle comedy, delicate performance and musical nostalgia to sympathetically explore the issues surrounding the care of the elderly. The performance, conceived to raise money and awareness of dementia stands up on its artistic merits as well as being for a worthy cause.

We follow the intertwined stories of ‘Doodlebug’ - a 1940s musical nostalgia duo - as they perform in the eponymous care home and the tales of two of its elderly residents. The story - set in modern day - opens with duo projecting their songs into the audience who assume the role of the care home residents; the quality of the voices and performances and the warmth of the banter with the crowd immediately set an endearing tone.

But all is not as it seems with the pair who quickly reveal that they have diverging ambitions, both for the act and their own careers. Eric (Steve Cooper) has a drive to build the duo into a force for good within the care homes of the Rosendale Valley whole Edna/Kylie (Sophie Osbourne) dreams of using her LAMDA background for greater things. 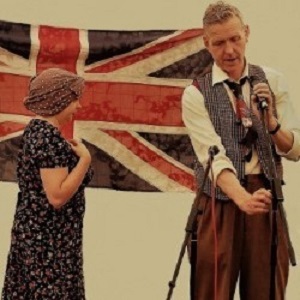 Writer, performer and driving force for the project Steve Cooper shines throughout and along with exquisite physical and vocal acting skill he radiates an unassuming magnetic charisma that spills over from the acting performance into the post show interaction with the audience.

Via seamless on stage switches of costume and performance the duo take turns in assuming the character of one of the Paradise Lodge residents - firstly within the care home context, then via a series of flashbacks, tracking their later lives as their need for nursing home care develops.

Cooper takes the role of Ronnie, gently but convincingly representing the well observed arthritic hands and gummy smile of an elderly gent - as we follow his story of reluctant slow, decline.

As the interludes from the musical duo continue we are exposed to a deliberately saccharine roll call of contextless nostalgia references - the use of which as chirpy call-backs to yesteryear are intentionally at odds with the gravity of their war time reality.

Throughout the pair showcase their singing talent as they run through a catalogue of war time classics including ‘The White Cliffs of Dover’ and of course ‘Who Do You Think You Are Kidding Mr Hitler’.

Sophie Osbourne delivers compelling and engaging acting performance representing the frustrated ambition of Edna/Kylie and transforms into and out of the well observed care home resident Violet - whose story is equally packed with endearing humour and sadness. Although both actors perform exceptionally, as the back stories develop it is notable that the younger characters that they play are slightly less thoroughly conceived and portrayed.

The performance is held in the Dairy Room - a carefully converted space within a grand, oak panelled stone building located in Udderbelly’s stronghold off Bristo Square; the lighting and sound is managed expertly to support the overall quality of the production.

Through much laughter and some tears the stories weave towards their touching conclusions and it seems there is more to Eddie’s dedication to care home entertainment than was immediately apparent.

This is a delightful moving, thought provoking, entertaining piece of theatre which addresses a painful subject with sympathetic, well observed writing clearly drawn from personal experience. I would urge anyone to see this show to support its worthy cause, to explore the issues surrounding the later lives of loved ones and also to have a heart-warming experience.