Of all the Fringe productions I’ve seen this year, this is the one that should have appealed to me the most: sci-fi, possibly a parody, a silly comedy by a writer who enjoys Carry On films. Everything you need for the perfect lowbrow evening. Unfortunately, that wasn’t the case. This is only my opinion – and I’d love to be in the minority – but I didn’t enjoy this very much.

The evening started on a negative (but unavoidable) note, with writer John Waterhouse apologising for the absence of one of the cast, so the role of the alien controller would be played by the director, Ian Ralph, who had stepped in at the last moment. Fair enough, these things happen, though strangely, in the elaborate colour programme all the actors are present and no one is cast as the controller at all. Well done to Ian Ralph for stepping into the breach, if that’s what happened. He read his lines from a clipboard, which might have ruined the suspension of belief… but it was unavoidable. 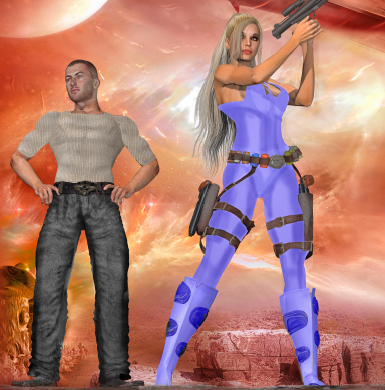 The play opened with a space craft crashing (offset) and Gabi (Christina Sedgwick) ace space pilot and feisty leggy blonde – wandering onto the set, dazed. She looked vaguely like she was supposed to be a Barberella-esque, stylised ‘Fifties spaceling, but this wasn’t really made obvious. She was attacked by a hideous woman-eating space-alien – literally someone in a green sheet. Is it parodying bad B-movie sci-fi? Almost certainly, but not very effectively.

Next, many women slinked across the stage in colourful lycra, portraying different types of broad-speaking, northern space-aliens from outer space. There was far too much clumsy exposition and not enough humour.

I thought things were looking up when the male lead, Paul Worrall, playing missing Earth astronaut, Steve Morris, strode onto the stage and stood with his hands on his hips, like a superhero. He spoke in a faux-American accent and was engaging to watch as he did exaggerated facial acting and pouting. I thought: this man knows how to do parody; he’s overacting, because he’s supposed to be overacting. I felt the rest of the cast were just going through the motions.

There was much talk of the alien transport, the powerful “Air bikes”, which take a lot of skill to fly, then a ‘Fifties style, pink, mini tricycle with winged mud guards and space-tassels, rolled onto the stage. It was so ludicrous it was hilarious, but it seems a bit out of kilter with the rest of the humour.

There was an amusing fight scene in slow motion, which worked well, complete with Batman-style BAM and BIFF placards, then there was a song and dance number, which was entertaining, if odd and out of place; this felt like it ought to be the climax. The story came to a natural end, but the play just carried on. The pacing was all over the place: it was at least double the length it should have been and the audience were fidgeting restlessly.

If it was intending to be a parody of early sci-fi like Barbarella and Flash Gordon, then it needed to go for it in a big way. Instead it seemed to flounder around not knowing which direction it was aiming for. It was like a first draft – and perhaps it was. It was too slow, it wasn’t funny enough and it was way too long. I felt at times it was like a school production, or like a pantomime. I’m just not sure what this was supposed to be. It would fare better if it made up its spacemind and went for it full throttle.