Showing at the Kings Arms, Salford for another two days is Jack Fairhurst’s dark comedy, ‘Holy Sh*t’, a story about two priests that are faced with a difficult task of raising money to fund the repairs of their crumbling church. Desperate to save the house of God, they are presented with an answer to their prayers- it just involves digging up bodies in the graveyard!

The play begins with the priests, Father George Hobbs and Father Charlie Moss, each holding a shovel in their hands, standing over a dead body- a great way to get stuck into the story. After much quibbling over what to do, and the sheer absurdity of the situation, the story retraces back to how the priests first came to work together, and from there we discover their journey.

The play changes from past to present frequently, the present being a narration of the story told by a policewoman who discovers the shenanigans of these priests, providing the audience with clarification of the events that are about to be told. 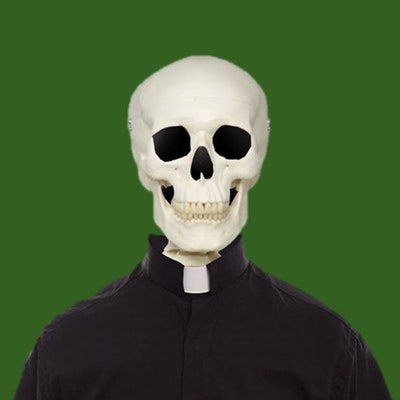 Once establishing that the priests can no longer fund the church successfully, they become aquatinted with a local professor of a University, who welcomes any decaying matter for a fair price- and who better has a supply of decaying matter? The priests are faced with many problems with digging up the dead, as you can imagine, and whilst trying to be discrete about their new found scheme, as well as justifying their actions in a holy manner, they become involved with matters a lot more complex than they had anticipated...

The venue provides a perfect setting for the play, the tall, arched ceiling creating an illusion of a church spire, the dark walls, and the authentic aging of the room. However, the presentation of the set was a bit lack lustre, which consisted of a cupboard that provided multi-functional use for props. The object looked bulky and took up too much of the space, and didn’t seem to provide much purpose of it being there. Instead, it delayed scene changes, and hindered the play. There were a number of technical issues with this, which left me thinking- did they really need it? The space itself was enough.

The scene changes indeed were at times messy, and did not provide a smooth transition, which was jarring as it took me out of the story several times. This direction let the play down slightly.

The story itself holds great potential and starts off on a high, but sadly the momentum and excitement seems to fade. There were a lot of characters that appeared in and out which seemed quite pointless, I wanted to be invested in the story of the priests, but there wasn't enough room for the characters to develop. For a dark comedy there was too much slapstick and not enough darkness to really engage with the characters for my liking. There is, however, an altercation at the end which is meant to provide the audience with a twisted turn of events, but there wasn’t enough build-up of tension throughout the play to create an impact to do the ending any justice. Having said that, the actors who played the priests were fantastic, both acting with immense energy and humour- this play would be fitting for a two man show, as the scenes when it was just the two of them where the most captivating. Huge credit to these two actors (apologies for not naming them, there was no programme!).

Fairhurst has created a genius idea with this play, and the characters of Father Charlie and George are extremely engaging, however, I believe that there is still room for development. This one doesn’t always hit the right notes, but it is definitely worth seeing for the comedic duo.https://manchesterfringe.eventotron.com/?event=37108