It’s a brave theatre company that tempts the weather gods by putting on an outdoor performance of The Tempest, but Illyria are nothing if not courageous, and it is a bravery that pays off with Prospero and Antonio transformed into Prospera and Antonia without even the slightest stumble in plot or script.

There must indeed have been magic at work during the performance at Sefton Park’s Palm House. 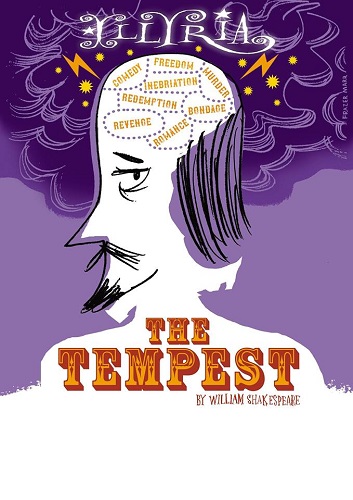 The set, beautifully designed and built by Alan Munden and Rufus Maurice respectively, while deceptively simple, changed from ship on storm-tossed waves to island with groves and caves while the five actors (Nicola Foxfield, Katy Helps, Rachel O’Hare, David Sayers, and Chris Wills) morphed from one character to another so faultlessly that Prospera’s staff must have been doing overtime back stage to make the swap, and a special mention must be made of Pat Farmer, who wove her own kind of magic in designing costumes that allowed such lightening quick changes to be so seamless. Indeed, David Sayers’ shift from distraught and grief stricken king to drunken butler and Rachel O’Hare’s from innocent Miranda to scheming and murderous Antonia are remarkable achievements in their own right.

But to the play. One of Shakespeare’s trickier works in that, from a comedic perspective, all ends well, and Oliver Gray as director has devised many comic moments that had the audience laughing out loud, but there is also darkness at its heart, with the romantic element tempered by plots of betrayal and murder, and Illyria meet this challenge head on. The ability to love is the redeeming feature in both Alonso and in Prospera who, while seeming to be the omnipotent manipulator of events, remains steadfastly human in Katy Helps’ portrayal, with her love for her daughter the force that drives her every decision, including her enslavement of Caliban. Indeed, Chris Wills leaves us in no doubt that while he rails against his captivity and blames Prospera for it, the evil in his nature is never far below the surface. Similarly, the relationship between Prospera and the spirit Ariel is drawn with exquisite tenderness. Indeed, Nichola Foxfield is a veritable force of nature and her ability to seemingly be everywhere at once is spell binding and the farewell scene between her and her mistress is truly poignant.

Add to the mix the playing of instruments and the singing of songs and what results is a truly magical performance that it is worth braving any tempest for.