Moth is a dark exploration of mental health and the limits of the human mind. Directed by Dan Meigh for Off The Ground Theatre, this interpretation of Declan Greene’s surreal story of high school angst and vicious bullying is hilarious, terrifying and painfully mesmerising.

Performed on a near bare stage, with only two chairs and a table being utilised as set, the play opens with Sebastian (Ben Newman) trying to get Claryssa (Kathryn McGurk) to talk to him. Sebastian is irritatingly happy and enthusiastic, and Claryssa is clearly furious about something, but what that is, we do not yet know.

What follows is their story and the explanation of how they go to this point and what happens to them afterwards. The story itself is disjointed and hops around timelines and in and out of reality and imagination in a dizzying way. 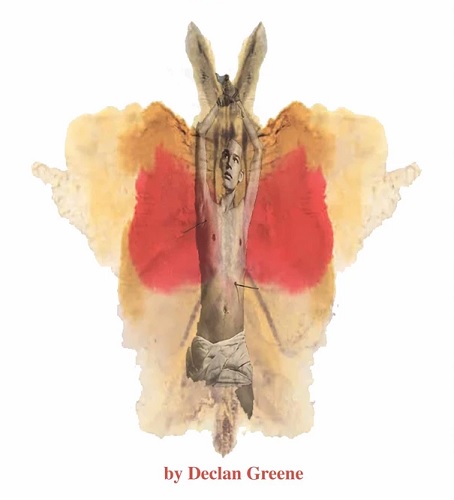 McGurk and Newman portray other characters throughout the story, using over exaggerated body shapes and accents to alter their performance. A technique which is often used in modern theatre, this can be distracting but in this play it feels right and adds to the disorientating atmosphere being created. Both McGurk and Newman are extremely talented young actors and clearly have a very bright future ahead of them. The chemistry between them was tangible and their commitment to the characters and performance absolute.

McGurk’s all black costume highlights both her “emo” persona and sets her apart from Newman wearing jeans and a white t-shirt. The casual normality of his costume violently jars with the story as his life spirals further and further out of control.

When Sebastian finds himself the victim of a particularly violent bullying incident, he wakes up with a moth in a jar next to is bed and the memory of a message from St Sebastian that he has been chosen to save the world from the apocalypse. These scenes are particularly bewildering, with Dan Vilela and James Kelly playing St Sebastian simultaneously, creating a futuristic and extraordinary portrayal which is disturbing and fascinating to behold.

On the surface, this is a dark and violent story of what it means to be unpopular, but scratch beneath and it is so much more than that. In a world where bullying has been enhanced by the power of social media and our own mortality is increasingly at the forefront of our minds, this is a terrifying fairy tale of life in a world that needs saving, but no one really knows how to go about it.

You can find out more about Off The Ground Theatre and their upcoming performances on their website https://www.offtheground.co.uk/